[German]This blog post describes (as a basic article) the steps to disable the so-called fast boot in Windows 10. This feature causes various issues with the operating system. So disabling fast boot is a test, if an issue is related with this feature.

Fast startup has been introduced in Windows 8, to shorten the system's boot time. Before shutting down, Windows 8 – 10 terminates all running applications and closes the user session. Then the Windows kernel is not stopped as in Windows 7. The operating system writes during shutdown parts of the memory with the kernel image into a file.

At the next boot, the saved system status (memory image, process status) is read back from the idle state file (hiberfil.sys) and the drivers are reinitialized if necessary.

The disadvantages and problems …

The most serious disadvantage that comes to mind is that the fast startup prevents, for example, recognition of the F8 function key at startup. Some systems also fall into a "deep hibernation" mode, where Windows 8 – 10 doesn't go into hibernation but into hybrid sleep mode. Windows does not switch to hibernation mode and turns not off the CPU or system off until the battery runs out of charge.

If the system is switched on again, it boots from the hibernation file. If a user attempt to invoke the BIOS settings page, by pressing any keys on boot, will then fail. In forums you will often come across people who cannot boot a notebook from a setup DVD or a system repair disc due to fast startup.

Some users also reporting unexplainable issues with drivers or unreliable booting or freezing systems. In Windows 10, there has been reports of slow booting, problems with the Start menu and the taskbar.

If you suspect that Windows 10 issues are caused by the fast boot, you can disable this feature in Control Panel via the power options.

1. Open control panel and click on the Power Options icon. Then activate the link Choose what the power buttons do on the left side of the window.

2. Click Change settings that are currently unavailable and confirm the UAC prompt. 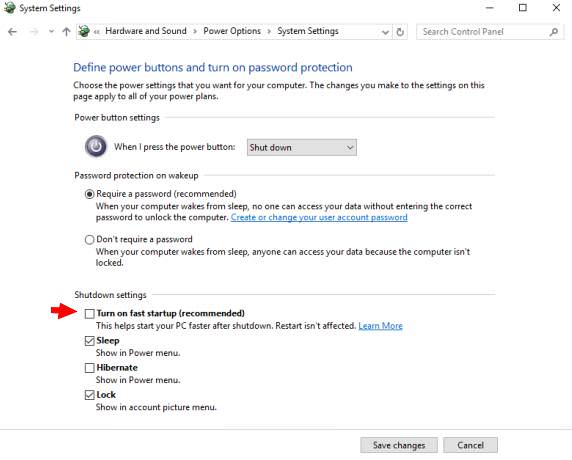 3. Uncheck Turn on fast startup (recommend) an click Save changes.

After these steps, fast startup is disabled. You can then test whether the problems have been solved.

This entry was posted in issue, Windows and tagged Tip, Windows 10. Bookmark the permalink.