[German]In Windows 10 April Update (version 1803), users users are facing cyclic Explorer crashes or freezes. Other applications may also be affected. The reason is a bug in Timeline. However, there is a workaround.

There are probably different error patterns that users will observe. There may be problems in the taskbar or the Windows Explorer crashes frequently.

A restart (may happen automatically after the Explorer crash) can fix the problem for a short time – until the next crash. There is a thread on the topic on reddit.com.

This morning my desktop started crashing the windows explorer including the desktop repeatedly, preventing access to apps, clicks, typing. I tried rebooting but immediately was faced with the same. This machine is on 17655. I had to leave to meet at a client site, so I left this machine in the state it was.

Short time later while at work, my Surface book 2 started doing the same (its on 17134). I thought this was strange and continued troubleshooting as I now had no working machines. I tried a number of things, but finally was able to get the machine working by enabling the built-in administrator account, setting a password and logging into it. There's some downsides to doing this, but at least I could navigate around the machine. On the Surface book, I could recreate the MS account login, but it would start crashing shortly thereafter (looks tied to sync of settings). That said, I went online to Microsoft's Account management page and removed all the data I could find in my microsoft account from the devices area.

I also was able to remain logged in under the Microsoft Account by stopping the Windows Search and Windows Error Reporting Services and disabling them, but that only worked on the surface book and not the desktop. From there, I tried a reset of the Surface Book PC and tried adding my account after cleaning everything, but nearly immediately the crashing started again (I believe again the sync of settings occurred). I've started backing up the desktop to wipe it as well, but I think if I use my MS-ID to log into it after blowing it away and reinstalling a production copy of windows I'll run into the same problem.

And if this article is correct, the bug is already known for a while, Microsoft just did not consider it necessary to fix the bug. 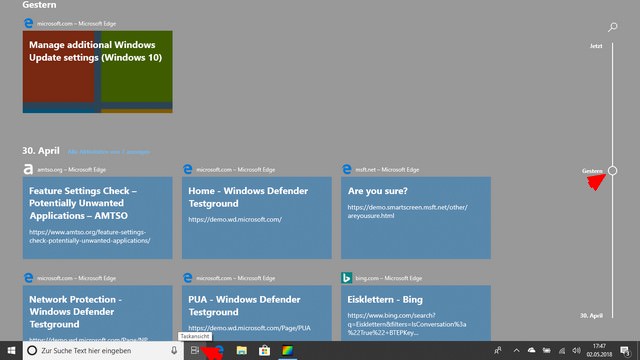 Fix: Switch off the activity history

Fortunately, a bright mind at Microsoft had the idea to switch off the timeline function. You can manage the activity history function in the Settings page by going to Privacy. Then you will find the category Activity History in the left column. 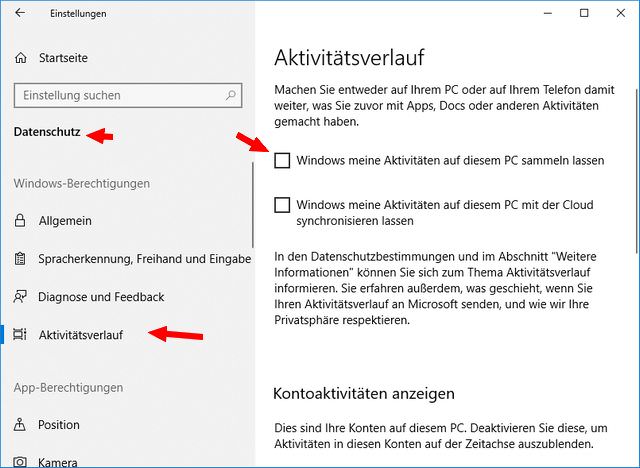 When selecting the entry there is the option 'Let Windows collect my activities on this PC'. If unchecked, the activity history (timeline) is turned off. Then the crashes should be fixed.

According to a German forum post, delete also everything under Activity History to prevent it from being affected.

If the explorer crashes to fast that you can't get into the settings, call the task manager with Ctrl + Alt + Del and then terminate the explorer.exe task. Start regedit.exe as a new task in the Task Manager and then navigate to the following key.

Create the 32-bit DWORD value EnableActivityFeed in this key and set it to 0 (switches off the timeline, see also). Then exit the Registry Editor and restart explorer.exe in Task Manager. Now the Explorer should not crash any more.