[German]So far I haven’t written about all rumors on Microsoft’s project Andromeda. Now, however, there are new information that concretizes some things. Microsoft’s Project Andromeda could be a foldable surface smartphone for your pocket.

The first information I stumbled upon is the article Microsoft Surface Chief Panos Panay Hints At Revolutionary Dual-Screen Andromeda Mobile Device at Hot Hardware. They speak of a dual-screen interface, which is probably collapsible. This is fueled by a tweet that Microsoft’s surface boss Panos Panay has published:

Do you think they got the resemblance right?
Huge thanks to LG Display for the awesome caricature. #nailedit pic.twitter.com/vejlOIVuoK

This is just a caricature of the LG display product team – and the question in the tweet is ‘Do you think they recognized the similarity correctly?’. Of course, the whole thing is an absolute teaser from Panos Panay, which really fuels the rumours about a dual-screen device. Could bee a great joke, of course.

Some information from a leaked e-mail

Tom Warren published the article Microsoft details secret ‘pocketable’ Surface device in leaked email at The Verge. Warren got a leaked internal e-mail that say, that Microsoft has been working on a new mysterious surface device codenamed Andromeda for at least two years. The device has appeared several times in patents, reports and operating system references and will feature a dual-display design. According to the Microsoft internal document that was leaked to Tom Warren, this is a surface device that you can put in your pocket.

Already in December 2017 there were first render images posted by enthusiasts on Twitter based on patent descriptions. If you want to get an impression of what such a thing could look like, you will find it on this website. 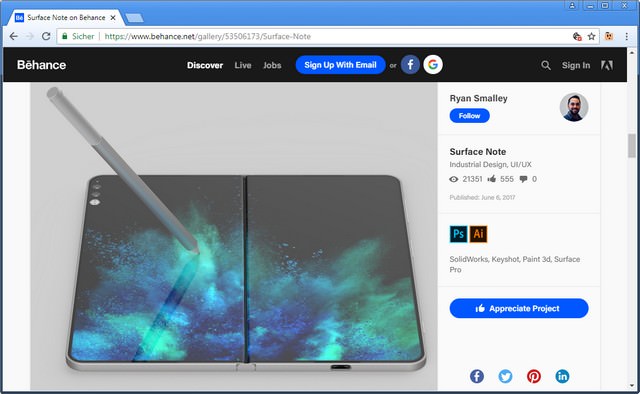 Behance is probably a design company where young talents can realize their ideas. The concept presented by Ryan Smalley dates from 2017 and probably has nothing to do with Microsoft’s development. But Smalley does have an idea of what might come out of Andromeda – Microsoft can hardly show up with triangular cases.

According to The Verge, Intel has produced prototypes with dual displays. But Warren also points out that Microsoft could pull the plug at any time. This has already been done with the Surface Mini, which has virtually been knocked out of production.

This entry was posted in devices, Windows and tagged Smartphone, Surface. Bookmark the permalink.