[German]After a longer test phase with Windows insiders, Microsoft released the cumulative update KB4469342 for Windows 10 Version 1809 on December 5, 2018. This fixes many bugs in this Windows 10 build. 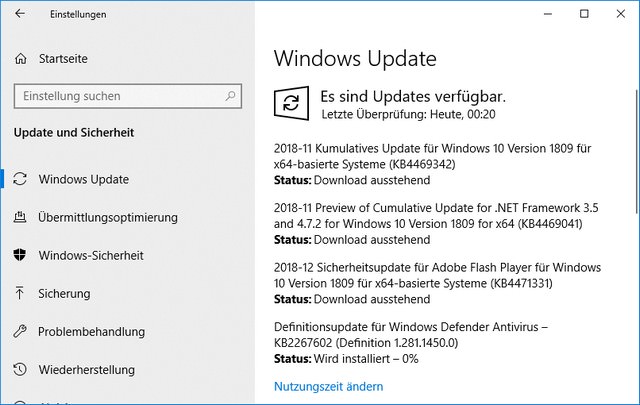 I had a test machine search for the update, and it was offered via Windows Update in the settings app (see picture above).

Note: Microsoft rolls out a preview of a cumulative update for the .NET Framework (KB4469041). The announcement can be found in at Technet.

From the above list, I would like to highlight the fixes for the file type assignment bug and the network run connection problem. Beside the official bug fix list, the 'hanging Explorer' issue and also the Jump List bug seems also fixed

Update KB4469342 is available via Windows Update. But you have to start the update search in the settings page. The package can also be downloaded from the Microsoft Update Catalog and installed manually.

For installation it is necessary that the Servicing Stack Update (SSU KB4470788) is already installed. If Update KB4469342 is installed via Windows Update, a missing SSU will be installed automatically.

Microsoft says that with this update the Seek Bar in Windows Media Player is broken. A fix is planned until mid-December 2018 (see Windows 10 V1607: Update KB4478877, WMP fix is coming). Furthermore, the bug in Edge mentioned in the blog post Windows 10 V1809: NVidia hibernation issue & Edge bug is still listed as a known problem. This issue should be fixed with the nVidia hotfix update of the graphics driver mentioned in the blog post. 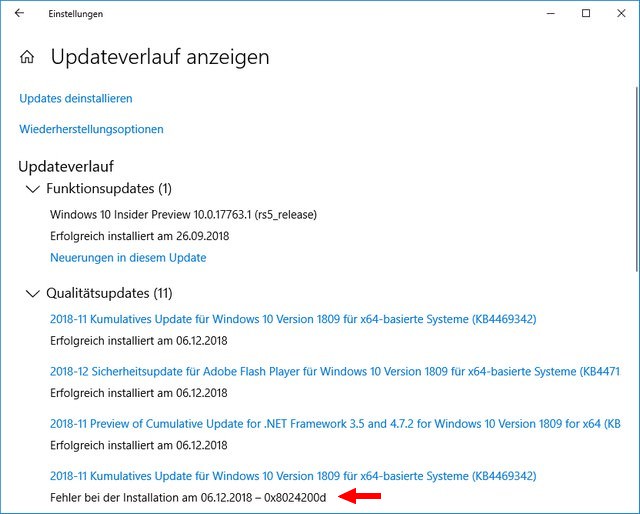 Something funny on the side: The update threw an error 0x8024200d, as it is described in the blog post Windows Update Error 0x8024200D. This is probably a download issue, but was corrected by the update client automatically. Afterwards the update has been downloaded and installed. This installation process even ran surprisingly smoothly.

Addendum: Some slight issues has been reported. One user wrote, that there is no mor Windows Hello login. This could be a privacy setting for Camera app in Settings page. Another user left a comment within my German blog, that the network adapter has been set to 'public' on 3 machines – so no more RDP connections was possible.

This entry was posted in Update, Windows and tagged KB4469342, Update, Version 1809, Windows 10. Bookmark the permalink.