[German]Currently it seems, that Microsoft's Update Services are globally disturbed. Users around the world are reporting, that Windows Update can't reach Microsoft's update servers. I've a Windows 10 test machine, where I confirmed this issue. 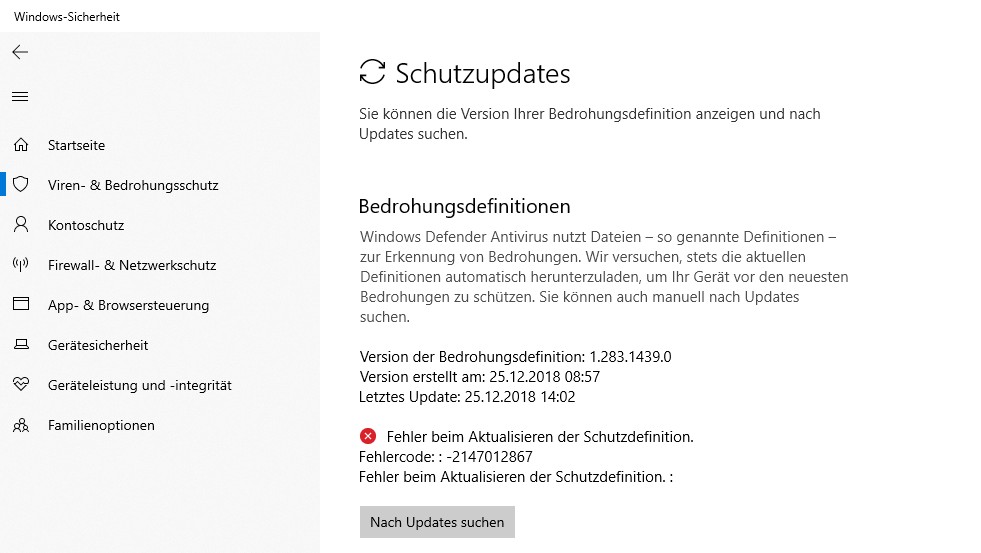 Windows Defender has not been updated since December 25, 2018 on that machine (well, I doesn't use it on a daily base). The Defender update search, I triggered, fails with the Defender update error -2147012867. I converted the decimal value to a hexadecimal error code (0x80072EFD).

So this is an error pattern that can have many different causes. The problem areas, from antivirus solutions to incorrect time settings, are covered in the blog posts above. I was able to exclude third-party antivirus solutions, checked the time and date, and perform Internet time synchronization – all without success.

My guess: Either a service is broken or Microsoft has an update server down. Checking the Windows Defender update service showed that it is running. So it might be something with Microsoft's update servers.

I then tried to start a Windows Update search and I immediately got the following message.

This means: The update service at Microsoft cannot be reached. You may check your Internet connection (which won't help) or just wait and try later.

Barb Bowman reported on Twitter about issues – so I wasn't alone. Then I found this article at Bleeping Computer, who confirmed the issue.

Definitely a Comcast issue…I changed DNS servers and now I can update.

On Twitter, a user then gives a hint that Comcast probably has problems with a DNS server (see above tweet), which means that the requests to the Microsoft update service cannot be resolved. The suggestion is to use an alternative DNS server (e.g. Google 8.8.8.8). This hint can also be found at Bleeping Computer and Softpedia, but that didn't help here. This fix also would have surprised me, as I am not routed via Comcast DNS servers. Addition: At askwoody.com there is a discussion that supports my assumptions.

I'm currently guessing that the people who succeeded in changing the DNS server were simply victims of coincidence. If the Microsoft update service has hiccups (we could observe this on a number of Microsoft services during the week), some client will get a short connection to the Microsoft server from time to time. If the update is successful and the DNS server has just been changed, the person assumes 'it was the DNS server', but did a wrong assumption. I think it only remains to wait until this has been fixed by Microsoft – or do you have other insights?

Addendum1: At Bleeping Computer Lawrence Adams wrote, a source close to that case told him, that Microsoft has fixed the issue. Currently (Feb. 1, 2019, 8:00 UTC+1) I can't confirm that – the Win 10 V1809 test machine still not able to update Defender or search for updates.

Addendum2:  At reddit.com a Microsoft employee left the message, that the issue is known.

Microsoft is aware of this issue and is investigating. We'll provide more information as it becomes available.

On February 1, 2019, 8:30 a.m. (UTC+1, Germany), I can see that the test machine with Windows 10 V1809 is neither running Defender updates nor Windows updates successfully. On the other hand, a Windows 7 client reports that there are no new updates available.

I've tested also tools like WUMgr, that allows to check offline for updates. But I failed (Win 7 and Win10), because the tools can't reach Microsoft's update service. Currently (Feb. 1, 2019, 00.25 p.m. UTC +1) Windows Security Center is able to search for Defender updates – but indefinitely w/o results.