How To: BlueKeep-Check for Windows

[German]The blog post discusses a How To the question of how end users and administrators can easily check whether their systems with Windows XP to Windows 7 as well as their server counterparts are provided with a patch for the critical vulnerability BlueKeep (CVE-2019-0708) or are vulnerable. In addition, a brief explanation of how a network can be scanned for vulnerable computers is given.

In Windows XP to Windows 7 and its server counterparts, there is a critical vulnerability called BlueKeep (CVE-2019-0708) that may be used to hijack systems. Windows 8 and later systems are not vulnerable to the BlueKeep vulnerability.

Microsoft has provided security updates for closing this vulnerability for affected Windows systems since May 14, 2019 – even for versions that have long fallen out of support, such as Windows XP (see my blog post Critical update for Windows XP up to Windows 7 (May 2019) and BlueKeep: Patch for pirated copies; SSL tunnel as a risk factor). So the vulnerability seems to be critical, and Microsoft warn against running systems without installed security updates (see BlueKeep vulnerability: Microsoft warns about a wormable malware epedemia). Also US-CERT issued a warning with advices how to secure systems beside patching:

Security researchers have nevertheless recently found over 950,000 vulnerable Windows systems without the required security update that can be accessed via the Internet during a scan (see Nearly 1 million Windows machines with BlueKeep vulnerability). I had reported extensively on this here in the blog (see link list at the end of article)

So it’s a grotesque situation: security updates are available, countermeasures and the risk of an attack are known, but people don’t patch or react. However, some users fail to quickly check whether the updates required to close the BlueKeep vulnerability are installed. Microsoft has little to offer – corporate administrators need to know how to check this. Due to questions and discussions here in the blog I decided to provide the following information.

Am I actually in danger?

First question that many users might ask themselves: Do I really have to assume that I am at risk? Microsoft provides updates for Windows XP to Windows 7 and their server counterparts. But the question ‘Are home users also affected?’ came up relatively quickly in the blog, and it was noted that a machine hanging behind a firewall that blocks certain ports for the Remote Desktop Protocol (RDP) is not vulnerable to Internet attacks.

In first approximation one can assume that there should be no endangerment in the area of home users. The most vulnerable are Windows servers, on which a remote desktop server has been set up to handle incoming requests. Talos has also published the security article Using Firepower to defend against encrypted RDP attacks like BlueKeep, which explains that in Windows 7 you probably have to overcome several hurdles to be vulnerable.

In first approximation one can assume that there should be no endangerment in the area of home users. The most vulnerable are Windows servers, on which a remote desktop server has been set up to handle incoming requests. There is also the security article from Talos which explains that in Windows 7 you probably have to overcome several hurdles in order to be vulnerable. But if Microsoft provides a security update, you should also install it.

Is the BlueKeep security update installed?

The easiest way to check if there is a risk regarding BlueKeep is to check if the required security update is installed. To do this, you could view the history of installed Windows updates.

To view the Windows update history, try the following steps, to check whether the required update is is available.

2. Type into the Search Control Panel of the View update history windows the kb number required. 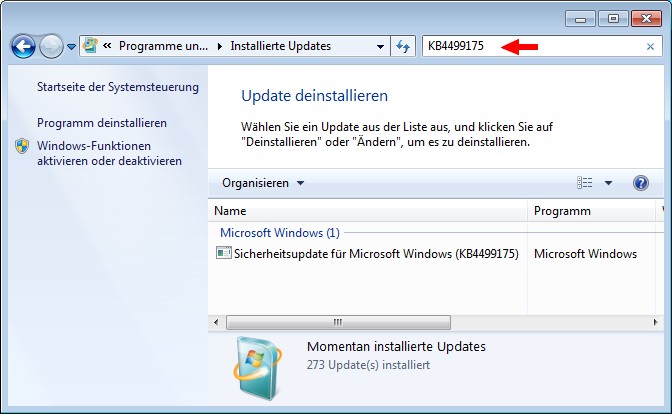 If the update is listed there, you don’t need to do anything. If the update is also missing there, simply download the relevant package from Microsoft and install it manually. If the update already exists, the second installation will probably be rejected with a corresponding hint. Below is alist of security updates to mitigate the BlueKeep vulnerability.

Use a batch file to check the local system

German blog reader Bernhard M. has send me two small batch files he used to check a local system for required updates (thanks). I’ve modifies on batch file in a way, that it checks, if one of the necessary security updates is installed. It should work for Windows XP up to Windows 7 and the Server pendants.

Select the instructions above, copy them to the clipboard using Ctrl+c, open the Windows Editor Notepad.exe and paste the clipboard with the Ctrl+v key combination. Save the document into a file BlueKeep-Check.bat.

If this file is executed by double-clicking, the command wmic qfe determines the installed updates and saves the result in a text file. This text file is then simply searched for the required updates with findstr. The results will be reported afterwards (see following image). 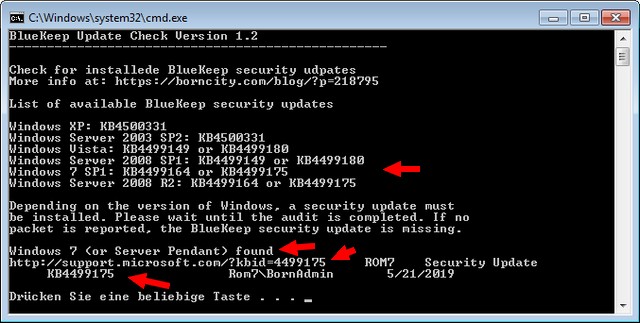 The interpretation of the results is quite simple: If no update is reported during this check, it is missing and the computer is not protected against BlueKeep. If an update is reported (as in the picture above), the patch is installed. It is a quick-and-dirty solution, which I tested only briefly under Windows 7 SP1. But it should also work under Windows XP, Vista and its server counterparts. Only the check for the Windows version (introduced in version 1.2 of this batch file) may fail to detect Windows Server 2003 (or similar).

Administrators who maintain larger installations, even with servers running the Remote Desktop Service, need a better testing method. There it is the question: Can a computer be reached from the Internet or via a network by RDP and is it vulnerable due to a missing update?

There is a script-based scanner by Kevin Beaumont in a Docker container. But I simply consider this solution to be too complexto be used quickly and easily. Rather for large corporate environments, where you test the network and have an infrastructure with docker containers anyway.

A second program for scanning networks for the BlueKeep vulnerability is by David Graham and is called rdpscan. David Graham published the source code as a Visual Studio project on GitHub. And I found the GitHub page of Graham, where he offers precompiled binary versions of the program for Windows and macOS. On his blog (deleted) there is a Linux version for download and a description. Use program is from a command prompt window as:

The tool knows three results which can be displayed as single-line messages in the command prompt window.

During my test under Windows 10 and Windows 7, where no Remote Desktop Service is running, I got the message ‘UNKNOWN – no connection – timeout’, because the service did not respond. 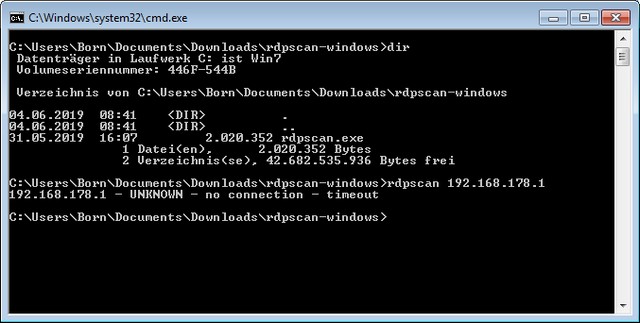 Of course, you don’t know if it’s because you entered a wrong IP address or if the computer doesn’t provide a remote desktop service that can be reached via the network. But I think that experienced administrators can rule out other causes or test against a working RDP server. Together with the BlueKeep-Update-Check above you should make some progress. Maybe it will help you. If you have any comments or suggestions, please leave a comment.

Addendum 06/11/2029: Bleeping Computer just published this articles that has some additional details about rdpscan.

This entry was posted in Security, Update, Windows and tagged BlueKeep, Security, Windows. Bookmark the permalink.

2 Responses to How To: BlueKeep-Check for Windows