I've described the following behavior (and some workarounds) since the release of the first Insider Preview of update KB4512941 (released August 21, 2019) within the articles linked at the end of this blog post.

In my case, just change the value from 0 to 1 in "BingSearchEnabled" and solve the problem without deleting anything.

But some users has send me the feedback (see the tweet above and this German comment for instance), that switching BingSearchEnabled to 0 or 1 didn't change anything. Some has to remove the DWORD value BingSearchEnabled from registry, to cure the issues. Another user commented on my German heise article:

Effect the same, the load goes to 1 core and doesn't release it anymore. With taskkill -IM SearchUI.exe /F is quiet again.

Another German user has send me an additional observation within this comment – below I've translated it.

I had to set the RegKey HKCU the BingEnabledSearch to "1" BEFORE the update to the 18362.329. Only then everything worked again after the update. When I tried to set the value to "1" or delete the complete DWORD after the installation, this had exactly NULL effect. The Cortana Task had enormous CPU load on both computers. This could not be fixed. Other attempts led to the Windows search not working anymore.

Before I installed the update, the RegKey worked for me, and the web search could be deactivated. After the update the keys won't work at all anymore. I can do what I want, the web search remains active. And as already mentioned, the GPO settings don't seem to work anymore, I can't deactivate the web search.

He expressed his suspicion, that Microsoft intends to cut the GPO's for consumer again or force the web and Cloud search. Or it could also be related to the fact they started to separate Cortana from the system / search, and they screwed it up.

The same applies to installation from 18362.30 and upgrade to .329 via 'dism /online /add-package' of the 'cab' packages, or via the '.msu' packages released in the meantime.

For testing, the Bing search can be temporarily disabled without increasing CPU load by disabling the Group Policy "Search – Don't search the web and don't show web results in search" before each shutdown, and only enabled after a restart.

I have added additional screenshots. The adjustment of the group policy with gpedit.msc can also be checked with OO Shutup (reading).
The web search is active if you enter e.g. 'gpedit.msc' in the search field and a link to 'Show web results' appears. 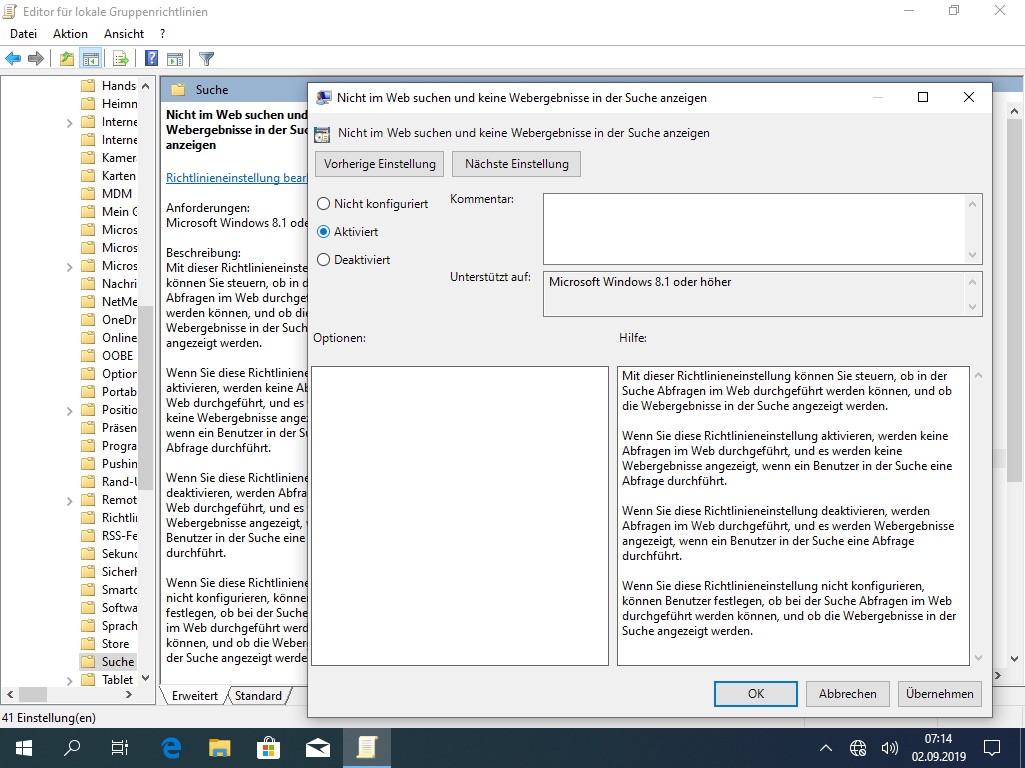 Weighting the feedback outlined above, it seems pretty complicated. We have to wait for a fix from Microsoft. I've escalated that bug to Microsoft's developers via Microsoft Answers forum (as a MS answers community manager I'm still able to do this).