[German]The cumulative update KB4512941 for Windows 10 Version 1903 released on August 30, 2019 seems to cause display issues for some users (e.g. screenshots). The display is turned to a colored reddish (red screen tint), as in night mode, if screenshots are obtained – or without screenshots on some systems. For Lenovo devices it could be the Vantage app, but also graphics drivers were mentioned. Here is an overview, what I know so far. Addendum: It’s the Vantage app, Microsoft confirmed the issue and Lenovo has provided a support article (see inside).

I hadn’t noticed it, but I got the comment here (thanks for that) from a German blog reader, pointing to that issue.

Are night mode and screenshots collide?

The folks at MSPU has mentioned within an article, I was pointed to this German WinFuture article. A user reported, that he is plagued by a strange bug. When he tries to take a screenshot, the screen turns reddish/orange (like night in mode).

The user posted the above screenshot within the Microsoft Answers forum with am a description:

My screen turns red when I capture a screenshot.

My screen turns red when I capture a screenshot. How can I turn it off? I haven’t changed any settings; yesterday it was fine. I tried using different snipping tools, and the regular PrtSc button. All red.

I have the night mode off, and everything else is regular.

As soon as he wants to make a screenshot using the print key, the display becomes reddish. Of course every observer would tap on the night mode, which forces exactly this behavior for the desktop display (should be more eye friendly). However, the user writes that he has not activated night mode at all.

The user had tested several screenshot programs, all with the same error. In this case the update of the graphic driver led to a correction of the error.

Wait, there is more

However, another user posted the screenshot shown below in the same thread. And he don’t use a screenshot before the desktop went to that color. 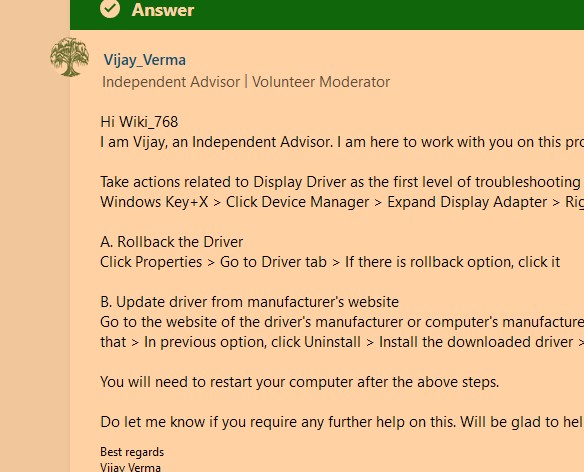 The user gets this reddish / orange display right after logon without further action. This user has a Lenovo Yoga 710-14ISK with Intel Core i5 and Intel HD Graphics 520. His attempt to install a driver went wrong – the latest driver could not be installed.

It is probably an isolated problem caused by graphics drivers. At reddit.com I came across a 2 year old post where someone got an Orange Screen of Dead (instead of a BSOD) because the graphics display spun.

Is Lenovo Vantage app to blame?

My German collegues at deskmodder.de found another thread in Microsoft Answers forum, where an affected user reported similar issues. Due to serveral typos, this wasn’t revealed within an ordinary internet search (I’ve amed the title of the post now). The Text in German says:

I have a problem with the screen color …. immediately after switching on the screen lights up normally and after 2 seconds the color turns yellow

One user presumed, that the Lenovo Vantage app may cause this behavior. The app also contains something like a night mode. Lenovo devides are known to have issues with night mode. At least one user at deskmodder.de has confirmed the Lenovo Vantage tool as the cause. A German blog reader confirmed here the same issue with a X380-YOGA. Addendum: I have now the feedback, that the Vantage app have to be blamed, update KB4512941 hasn’t been installed on that machine. There is also a Frensh MS Answers forum thread about that issue.

Addendum: German blog reader Problembär dropped a comment, linking to this Lenovo forum post. The post described the issue – an update of the Vantage app seems to be responsible.

Question: Any of you who are affected? And if so, does uninstalling the update KB4512941 or adjusting the screen display in the Vantage app help?

Update KB4512941 has caused several issues, see links below. But if it’s related to the Lenovo Vantage app, the update wouldn’t be involved.

The above text contains the most important information. But Microsoft had made an entry in the dashboard with Windows 10 status. On September 11, 2019 Microsoft confirmed the issue that has existed since September 5, 2019. At the same time the info comes that it is the Eye Care feature of the Lenovo Vantag app that is causing the issue. In the meantime Lenovo has published this support article which shows how to solve the issue.