[German]Just a brief information I picked up, after a blog reader contacted me . Redmond delights its users of Windows 10 V1903 and V1909 randomly with the nag screen ‘Get Let’s make Windows even better …’ when they log in. Here a few information prepared.

German Blog reader Uwe O. contacted me a few days ago because of a strange observation. He writes about it:

Does your Windows 10 welcomes you as friendly as shown here, when you log on?

Uwe addresses the following message (it’s in German, see the English message below), shown as a nag screen using the full screen after login. 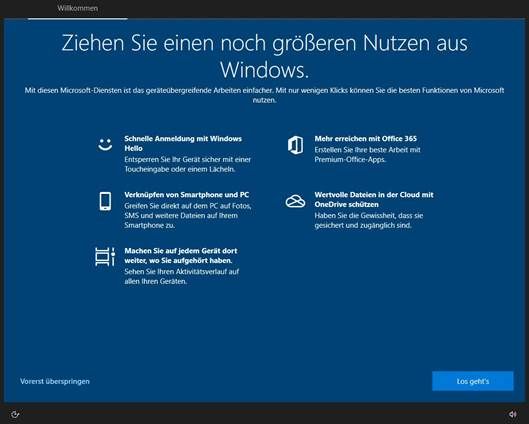 Shortly after I’ve posted the screen shot of the nag screen within my German blog, several blog readers confirmed, that they get the nag screen on a random base. At that time I still remembered something months agro, so I begun searching my old blog posts.

Some feedback a year ago

.@NorthFaceHiker @JenMsft @brandonleblanc @windowsinsider is this an annoying by design marketing thing or is it a bug I need t file FB on? Appeared this morning on SP3 running 18312 when I woke it from sleep. pic.twitter.com/FjwApbil0q

I had already responded to the tweet at the time and other users confirmed the behaviour. Jen Gentleman from Microsoft answered at that time and pointed out that the changes had already been announced in Windows 10 Insider Preview build 17682. Especially spicy: Barb Bowman wrote that she already uses some of the ‘introduced’ features on her device.

If you have an extremely positive attitude towards Microsoft, you’ll shrug the shoulders and possibly think: ‘ it’s nice when Microsoft presents its great new Windows 10 features to users’. If we would had a perfect Windows 10 product, I would nonchalantly overlook that senseless marketing attempt. But with the current circumstances I would quote it as the ordinary marketing bullshit from Redmond. No value at all, no one needs it, no one won’t that, but it nags users on a random base.

How to block the Nag Screen?

After mention the issue within my German blog post Windows: Patchday-Probleme März 2020?, the question arrose ‘how to block this nag screen?’. The guy from German site deskmodder.de pointed me to his Wiki with further hints.

1. Launch Regedit.exe in Windows 10 Version 1903 and navigate to the registry key below:

Create a 32 bit-DWORD value ScoobeSystemSettingEnabled and set it to 0. If you use Windows 10 1909 navigate to the registry key below.

Create a 32 bit-DWORD value SubscribedContent-310093Enabled anlegen and set it to 0. Then the nag screen should not be shown anymore for the current user.