[German]Microsoft has released the update KB4052623 for the Windows Defender anti-malware platform for Windows 10 on March 24, 2020. This update also fixes the irritating message that files were skipped during a scan.

What is the Defender scanning problem?

Since several weeks some Windows 10 users have been experiencing a strange effect when scanning their systems using Windows Defender. Although the scan is successful, at the end of the process the virus scanner reports skipped items during the scan. The following message is then displayed.

I had covered the case in more detail in the blog post Windows 10: Defender skips elements during scan. Since the affected users did not define exclusions for scanning, much indicated a problem with the network scan.

I then proved in the blog post Windows 10: Fix for skipped Defender scans that the skipped files are elements of the network scan. This was also useful, since scans of network shares create an unnecessary load.

In the blog post I had advised to ignore the message for the time being, but at the same time I had specified workarounds to change this behavior. At the same time, I had reported the issue to Windows Update (Microsoft's Twitter channel) with a link to my English blog post.

Already this morning I received a mail from blog reader Hans Thölen, who informed me about a new update:

Today I had on Windows Update the update for Windows Defender KB4052623 on offer. I have installed it. Then I reset the setting for scanning network files to not configured. With 2 times executed scans only the notification about the scan progress was displayed.

The notification of skipping did not appear both times. It seems that Microsoft has fixed the bug with this.

Also German blog reader left this comment, pointing out, that update KB4052623 raised the Antimalware-Scan-Engine to version 4.18.2003.8 and that the toast notification about skipped elements during a scan has been vanished. Got also a third comment from reader Pater with a similar observation. Thanks to all readers for the hints.

Version 4.18.2001.10 of the scan engine is mentioned as the cause of the high network traffic (current version is 4.18.2003.8). Microsoft is working on a fix internally – and my guess is that someone removed the files from the network scan in the anti-malware platform around March 10, 2020. In the meantime, administrators can work around this problem by temporarily disabling network protection. I did specify some Group Policies for this purpose in the blog post Windows 10: Fix for skipped Defender scans.

Where can I find the update and version info?

Finally, here are two hints that might be of interest to some blog readers. I had spent the night looking for new updates under Windows Update, but only saw the update described in the article Windows 10 190x: Update KB4541335. To check if an update for Defender has arrived, go from the Settings page to Windows Security and select Virus & Threat Protection. 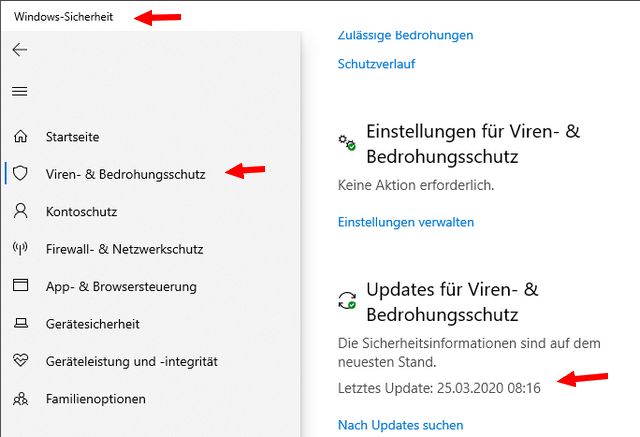 If you then scroll down the page, the latest update status should be displayed under Updates for Virus & Threat Protection. The screenshots here are obtained from my German Windows. And how to check the version of the antimalware engine?

Click to the Setting icon in the lower left pane of the Windows Security window. On the Settings page, scroll down and click on the About hyperlink. The page will then display all the information you need. 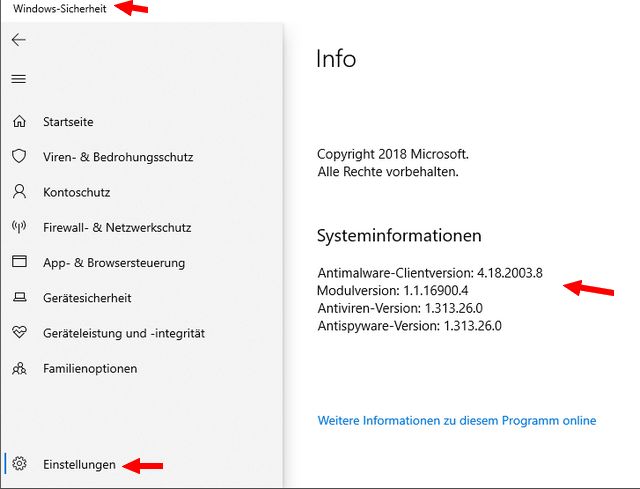