[German]On March 24, 2020, Microsoft released update KB4052623 for the Windows Defender anti-malware platform for Windows 10. Since that time, I have received reports of problems; the offline scan is said to be broken and there are unexpected errors. None of these bugs I can confirm.

Since the second week of March, some Windows 10 users experience a strange effect when scanning their systems using Windows Defender. Although the scan runs through, at the end of the process the virus scanner reports skipped items during the scan. The following message is then displayed.

I had covered the case in more detail in the blog post Windows 10: Defender skips elements during scan. Since the affected users did not define exclusions for scanning, much indicated a problem with the network scan. I then proved in the blog post Windows 10: Fix for skipped Defender scans that the skipped files are elements of the network scan. This was also useful, since scans of network shares create an unnecessary load.

After release of update KB4052623 I received feedback, that the toast notification about skipped items during scan is gone. I published the blog post Update KB4052623: Microsoft fixes Defender Scan Skip Bug. But I received some feedback from users, still facing the above message. Therefor I added a poll to my article Microsoft Defender: "Scan-Skip-Bug" mit Update KB4052623 anscheinend beseitigt at German news magazine heise. Hier is the result: 45% say, the notification is gone, but 24% says, they still receive this notification. 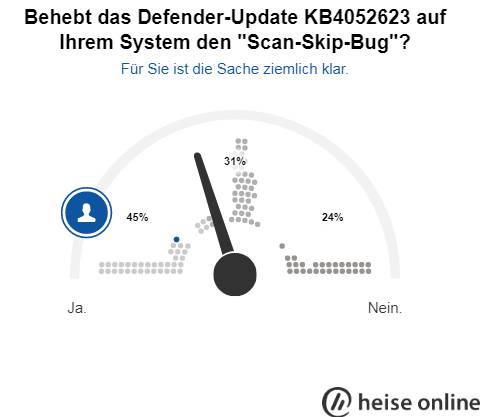 Windows Defender offers the option in the Windows Security window to perform an offline scan. Then the system boots into Windows PE and Defender performs the scan. This should enable the removal of certain malware. 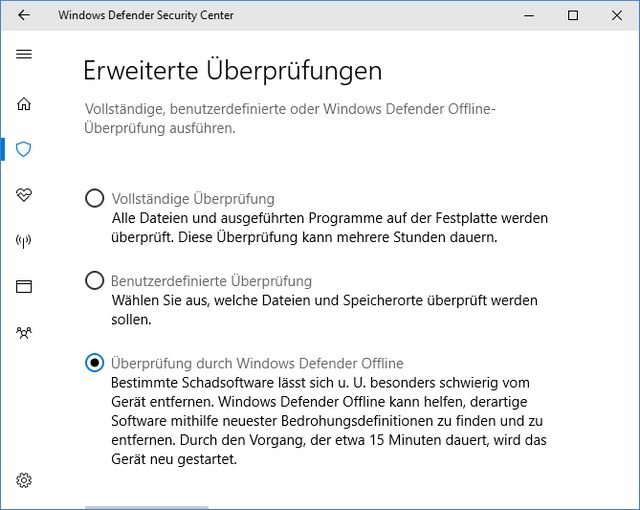 German blog reader Hans Thölen run into a problem. Shortly after my posts about update KB4052623 Hans sent me an email with the following info:

Today I noticed that the "Windows Defender Offline" check no longer works. There is something wrong with the update KB4052623.

He also commented within my German blog.  I just started an offline scan of Defender on my Windows 10 test machine and it took me three attempts because the initiation dialogs disappeared. Alsothough the initial phase with the GUI progress bar felt very long, the offline scan worked. I got in Windows PE a command prompt window saying 'Your PC is being scanned'. Windows Defender scanned thousands of items. The system has just booted back into Windows 10 V1909. So I can't prove Hans' error at the moment. Any of you who have problems with the offline scan?

I have received this comment from blog reader EP (thanks) which refers to a post at askwoody.com. These reddit users have just received the message "Unexpected error. Sorry, we ran into a problem. Please try again" – but this does not refer to the update. Uninstalling the update solved the problem. I didn't see this message. Anybody else is affected?