HP Business Notebooks: Trouble with Sure Recover and Windows 10 2004

What is Sure Recover?

HP Sure Recover is a technology used by Hewlett Packard on business notebooks. HP Sure Recover is designed to enable users to quickly and easily install a new operating system image of the device via a network connection using the HP Endpoint Security Controller. At the same time, HP Sure Recover enables IT to schedule the installation of new images across the entire fleet.

I just came across a case on Facebook where Sure Recover caused trouble when setting up an HP Elitebook with Windows 10 May 2020 Update (Version 2004). An ex-MVP colleague ran into a problem on two machines at once, which he then described on Facebook. I thought I'd post the information here on the blog, maybe there are more people affected. 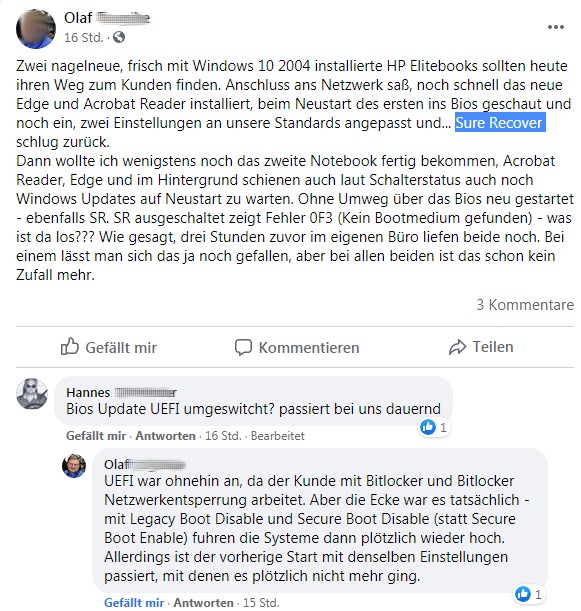 (HP Elitebooks: Issues with Sure Recover)

He had prepared two HP Elitebooks with Windows 10 Version 2004 for delivery to customers and ran into nasty problems during the final setup steps. He wrote (translated):

Two brand-new HP Elitebooks, freshly installed with Windows 10 2004, should be delivered to the customer today. We were connected to the network, quickly installed the new Edge and Acrobat Reader, looked at the bios when the first one was restarted, adjusted one or two settings to our standards and… Sure Recover fought back.

Then I wanted to get at least the second notebook ready, Acrobat Reader, Edge and in the background, according to the switch status, Windows Updates seemed to be waiting for restart. Restarted without detour via the Bios – also SR. SR switched off shows error 0F3 (no boot media found) – what's going on? As I said, three hours before in my own office both were still running. You can put up with that for one of them, but for both of them it is no longer a coincidence.

you search the internet for 'hp sure recover no operating system was found on this system', there are enough hits where the operating system is not found after installation or a BIOS update (e.g. here).  So it seems to be a problem bear. Olaf has solved the problem for himself as follows:

UEFI was on [was a tip from another FB user] anyway, as the customer is working with Bitlocker and Bitlocker network unlocking. But the corner was indeed there – with Legacy Boot Disable and Secure Boot Disable (instead of Secure Boot Enable) the systems suddenly started up again. However, the previous startup happened with the same settings that suddenly stopped working.

Is a case of: Works suddenly and nobody knows why. Any of you have similar experiences or an explanation?