[German]Security researchers from Forescout and JFrog have just made public the vulnerabilities in the NicheStack TCP/IP library grouped under the term INFRA:HALT. They had come across it while analyzing the library. This NicheStack TCP/IP library is used in products (industrial controllers and IOT industrial devices) from more than 200 vendors. More than 6,400 vulnerable devices are currently accessible online. 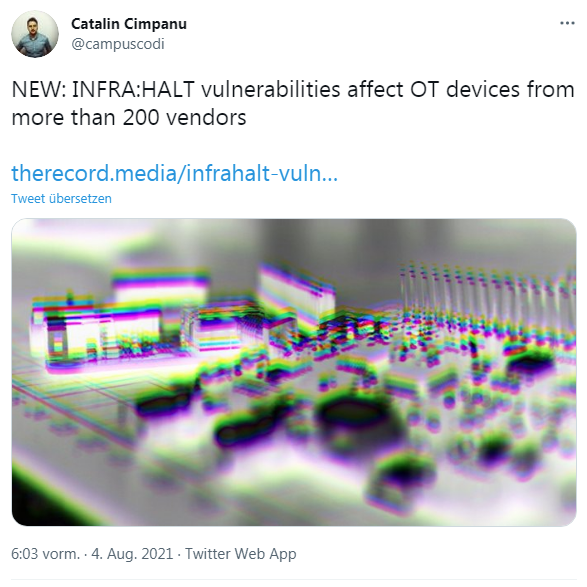 Problem with INFRA:HALT is that the closed-source TCP/IP stack NicheStack is used in operational technology systems (OT) and industrial control systems (ICS). For example, Siemens uses the library in its S7 controllers, but also vendors such as Emerson, Honeywell, Mitsubishi Electric, Rockwell Automation and Schneider Electric are customers of HCC Embedded and use NicheStack. The following table contains the list of vulnerabilities, some of which are classified as critical.

Shodan threw up m ore than 6400 hits on March 8, 2021, in a search for Internet-connected devices that showed signs of using the NicheStack. The large is operated in Canada and the U.S.; in Europe, Spain, Sweden and Italy are at the top of the list. But there are probably also hits in Germany, as the map here shows.

The manufacturer HCC Embedded has removed the vulnerabilities in NicheStack version 4.3, as can be read in this security advisory. Now it is important that the manufacturers of automation devices provide this new version as a patch and that users then also install the updates. For administrators, I would like to point to this GitHub page from Forescout. There you can find the project-memoria-detector written in Python. The tool project-memoria-detector can be used to check if a target network device is running a certain embedded TCP/IP stack with vulnerable vulnerabilities.