Exchange and ProxyShell: News from Microsoft and security experts

[German]I have reported several times on attacks on unpatched on-premises Exchange servers using the ProxyShell method in the blog. Now Microsoft has commented on this in an article and indicates which systems are at risk. In addition, I have received further information from HurricaneLabs, which administrators should be on the lookout for with regard to an infection. Therefore, a summary of the state of affairs once again.

The recommendation was to bring on-premises Exchange servers up to the latest patch level and ensure that they are not accessible via the Internet (see also Exchange Server: Update on ProxyShell vulnerabilities). Already in the blog postExchange ProxyLogon News: Patch status, new PoC and new findings (03/18/2021) I had then pointed out incipient attacks. The latest state of affairs is that before last weekend, almost 2,000 Exchange servers were successfully attacked (see Wave of attacks, almost 2,000 Exchange servers hacked via ProxyShell). Microsoft's antivirus tools can detect some malware. However, in the blog post ProxyShell, ProxyLogon and Microsoft's contradictious Exchange doc for virus scan exceptions, I had pointed out that Microsoft's recommendations exempt many Exchange folders from scanning.

Microsoft has not commented on the above issue for a long time. Security researcher Kevin Beaumont has taken this up in a series of tweets.

The problem seems to be that a number of Exchange Servers are listed as vulnerable by search engines, even though they are not vulnerable via ProxyShell. Here it is good that Microsoft makes a clear statement in the Techcommunity article ProxyShell vulnerabilities and your Exchange Server.

Exchange servers that meet any of the following criteria, however, are at risk and may already be infected.

Microsoft states that in all of the above scenarios, one of the latest supported CUs and all applicable SUs must be installed to be protected. Any Exchange servers that do not have a supported CU and the latest available SU are vulnerable to ProxyShell and other attacks that exploit older vulnerabilities. However, anyone who finds that they need to patch now is only halfway there after the update installation – the Exchange server may long ago have a backdoor in the form of a WebShell.

I already mentioned it here on the blog – and this article brings it up again. The LockFile ransomware already targets the ProxyShell vulnerability in Microsoft Exchange servers. And the attackers are using the PetitPotam vulnerability in Windows to launch attacks.

And I just became aware of another Exchange vulnerability via this tweet. At Pwn2Own 2021 in Vancouver, someone is reporting a new Microsoft Exchange Server remote code execution vulnerability. However, this one requires a man-in-the-middle attack to take effect.

There's also a security advisory from HurricaneLabs about the ProxyShell vulnerability, which came to my attention via the following tweet.  I found the article interesting because the authors specifically state what administrators can look for to detect signs of Exchange server compromise. Perhaps helpful to an administrator or two. 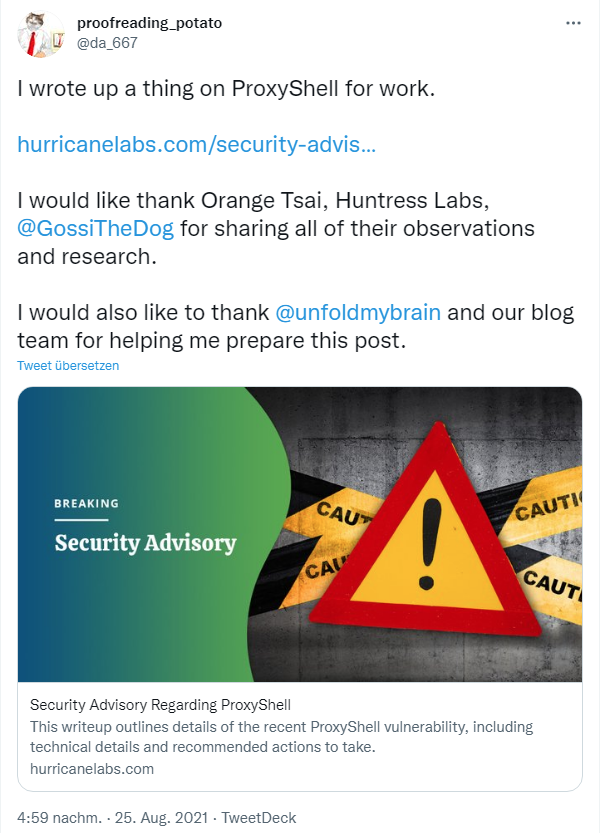 Florian Roth points out in this tweet that he has published new YARA rules for detecting attacks.