[German]Since July 2021, users of Microsoft Office Apps (Office 365) sometimes face the problem that the login fails with the error 0xC0070057. The application in question, such as Microsoft Teams, is then no longer usable. I have been alerted to the problem by a user, but have also found corresponding messages on the Internet. Here's an overview of what it's all about.

German blog reader Denis K. contacted me by email at the end of August 2021 to point out a current bug at Microsoft in connection with the Office apps.

Denis wrote me in his mail: Since I haven't found anything on the subject yet, except for a few Reddit posts, I would like to point you to a current bug at Microsoft and then gave me more details. The problem occurs when Office apps are used and they are supposed to log in to a Microsoft account.

Suddenly, or sometimes after a password change, the following error message appears: 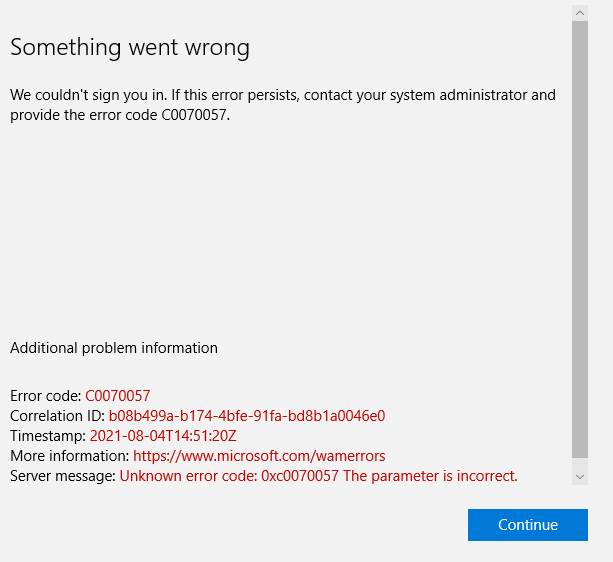 The server where the login is attempted returns error code 0xC0070057 with an unknown error reason. Part of this error code code (80070057) is a known Windows error that stands for "invalid parameters". In 0XC0070057 there is just another bit set. The screenshot above also shows such an error message (parameter incorrect). Denis wrote me about this:

From then on Teams cannot be used anymore. Uninstalling and installing the current Teams version does not help.

Currently I solve the problem by logging off the user in the Office apps, clicking on the duplicate work or school account in the Windows settings under Accounts à Email & accounts, and using the Manage button to log off from all devices.

After a restart, the work account can be disconnected under Accounts à Access work or school, and then the account can be added again under Email & accounts using the Add a work or school account button. I always run an Office update before doing this, but this will probably not be necessary.

Note: If you try to log in directly to Outlook instead of adding the account via the settings, the error message appears again. In hard cases, I have also had to delete the Outlook profile in the Control Panel.

I then did a quick search for the error code and found this reddit.com thread where the same issue was addressed back in July 2021.

Has anyone seen a variety of C0070057 errors when using their MSApps or Teams?

I'm working with a customer in a GCC High tenant and many people are unable to use either their Teams or their main Office suite due to that error (which does not appear to be anywhere on Google) and I'm not sure where else to look.

Apparently, that error code is "the function is incorrect" but it offers no other information. It seems related to patches installed yesterday. Maybe KB5004245?

Other users confirm this behavior with the Office 365 apps. One user writes that all of his 365 apps indicate to users that they are not enabled. When users try to log in, they receive the error code "0xc0070057 The parameter is incorrect" instead of being redirected to the password page.

Another user writes that two users are affected. The web version of the Office apps can still be used. The only pattern this user has noticed is that the error is triggered when someone resets their domain password.

A post in the reddit thread states that the behavior is related to cumulative update KB5004237 (but that is the Windows update for the printing issues (see Out-of-band update KB5005393 for Windows 10 V1607 printing issues (July 29, 2021)). Consequently, one user states that rolling back to the July 2021 cumulative update for Office fixed the problem.

Rolling back the cumulative update for July fixes the issue but obviously InfoSec is never thrilled about that solution.

It looks like there is some wrong credential stored in the user's profile. One user writes that one should delete the following folder in the user profile:

This will delete the accounts listed under Email & Accounts. After that, the account can be added back and the login should work again. In this post, someone still gives registry entries that can be used to fix it – but that doesn't seem to work. Another possibility is to use in the window of an (administrative) command prompt the command:

in the window of an (administrative) command prompt. This will disconnect a device from Azure Active Directory. With multifactor authentication, users should rush into the problem weekly, someone writes.

n a post just over three weeks ago, a user with Microsoft Premier support states that it's a confirmed bug in Microsoft Teams that is still expected to be fixed by Microsoft in 2021. Anyone affected by this? Is there a more elegant solution to the problem or is there already a known fix?

Addendum: See my blog post Fix for sporadic login error 0xC0070057 in Office apps and Teams for a solution.