[German]Security vendor Sophos published information about a new attack scenario in a series of tweets just before Christmas. Attackers are currently testing a new attack vector via RAR attachments with Word documents and scripts in mails. However, this involves distributing payloads hidden in RAR files with an Office document, which then use PowerShell to attack via script. I present this briefly here in the blog.

It was a tweet from Sophos  that alerted me on December 21, 2021. Their security researchers got their hands on an updated exploit that shows cyber criminals are testing a new attack method. The number 40444 in the following tweet refers to the CVE-2021-40444 vulnerability in the Windows MSHTM library. 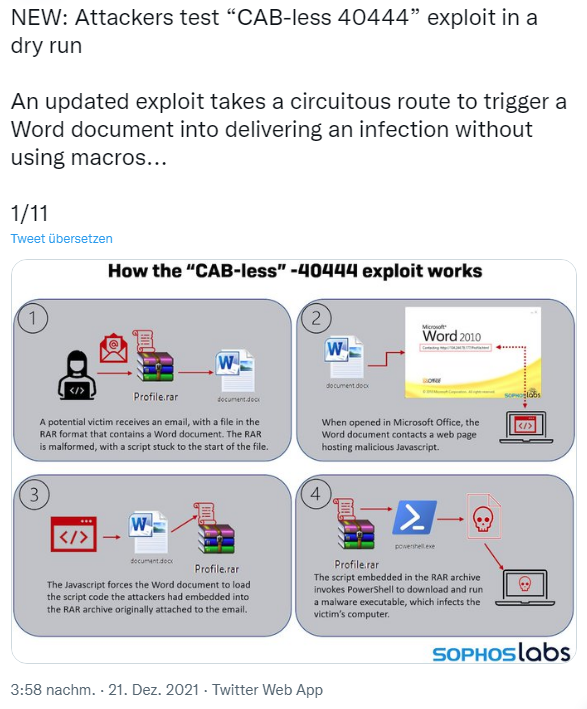 The victims receive an email with an attachment Profile.rar. The RAR archive contains a Word file document.docx. A script in the .rar file causes the file to start – the user is shown the Word document. As soon as the Word file opens in Office, a web page with a malicious javascript is called.

This javascript on the web page forces the Word document to embed the attacker's script code, which the attacker placed in the RAR archive Profile.rar of the email attachment. The script embedded in the RAR archive file Profile.rar then calls PowerShell in Windows. Then, an executable malware is downloaded from the Web via PowerShell and executed. The goal is to infect the victim's Windows machine.

I had already reported about that in the blog post Windows attacks via 0-day in installer and vulnerability in MSHTML. 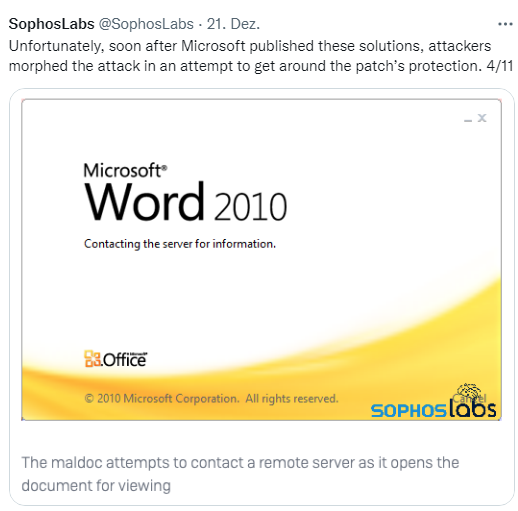 It is unclear whether the Microsoft security patch completely removes the vulnerability. Sophos writes in the above tweet that attackers are now making attempts to bypass this patch and exploit the vulnerability anyway. Between October 24 and 25, 2021, Sophos security researchers received a small number of spam email samples that contained corresponding file attachments. The attachments represent an escalation in the attackers' exploitation of the -40444 flaw and show that cyber criminals are looking for ways to exploit the vulnerability even on patched systems. Sophos published the details of the attacks in the blog post Attackers test "CAB-less 40444" exploit in a dry run.