[German]Brief note for VMware users and administrators. The vendor has published a security advisory for various products (VMware Workspace ONE Access, etc.) as of August 2, 2022, because there are numerous vulnerabilities there. In addition, I still came across an issue with VMware Workstation in conjunction with Windows 11, where TPM prevents cloning of VMs.

As of August 2, 2022, VMware has released security advisory VMSA-2022-0021 regarding vulnerabilities in various products. The discoverer of various vulnerabilities points this out in the following tweet. 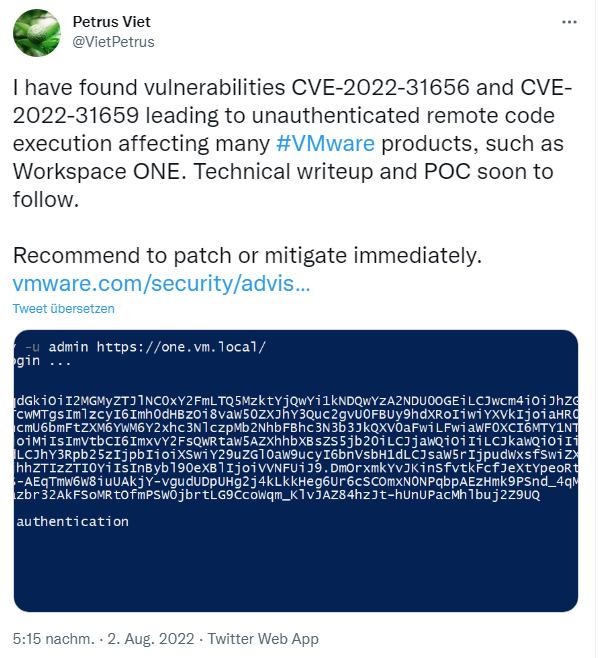 There are quite a few vulnerabilities in the VMware products listed below, with CVSSv3 scores ranging from 4.7 to 9.8 (critical). Here is the list of vulnerabilities reported to the vendor by their discoverers:

For example, CVE-2022-31656 is an authentication bypass vulnerability in VMware Workspace ONE Access, Identity Manager, and vRealize Automation. A malicious actor with network access to the user interface could potentially gain administrative access without requiring authentication. Because this affects local domain users, VMware has rated the severity of this bug as critical with a maximum CVSSv3 baseline of 9.8. VMware lists the following products as affected by the CVEs listed above and is providing security updates.

A list of security updates for each product can be viewed via VMware Advisory VMSA-2022-0021.

VMware Workstation users run into an error when cloning an encrypted virtual machine with Windows 11 as the guest operating system. The error:

You cannot make a linked clone of an encrypted virtual machine

is reported and the process aborts. Will Dormann points out this issue in the following tweet, which he encountered while working with a Windows 11 VM running VMware Workstation. 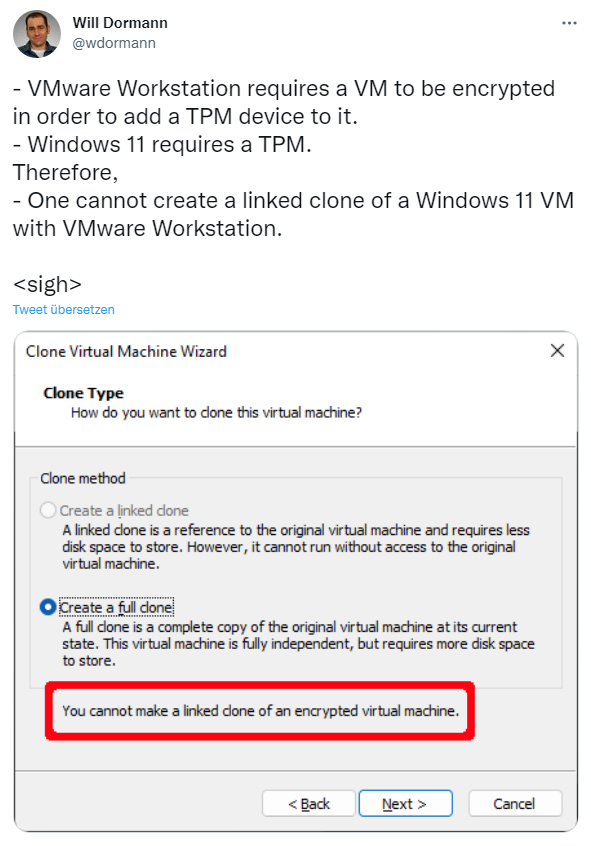 His explanation: In VMware Workstation, a virtual machine (VM) must be encrypted to use TPM in the guest OS. Windows 11 requires TPM if no workarounds are used. But then it is no longer possible to create such a VM as a clone.

But from VMware there is the document Installing Windows 11 as a guest OS on VMware Workstation Pro/Player and Fusion (86207), which explains how to solve the problem during setup. But is not a solution if a VM is to be cloned. Whether this will be fixed, I don't know – just keep it in mind.