[German]Small note for administrators who manage Android mobile devices via Intune. Microsoft has fixed the bug with Google that devices under Android 12 get lost in access. Android 12 devices should be able to be managed cleanly again via Microsoft's Intune MDM solution.

Microsoft published a tech community post writing that it is aware of an issue where customers lose access to resources managed by Microsoft Intune or are prevented from completing enrollment after upgrading certain devices from Android 11 to Android 12. This issue affects devices from the following manufacturers:

OPPO had identified the root cause of the issue and is working on a fix that will be released with the next OTA update for Android 12. Google worked with OnePlus and Realme to find the root cause and a possible solution.

I just noticed a tweet from Scott Duffey pointing to a solution to the above problem. Microsoft has updated the Techcommunity post from March 3, 2022. 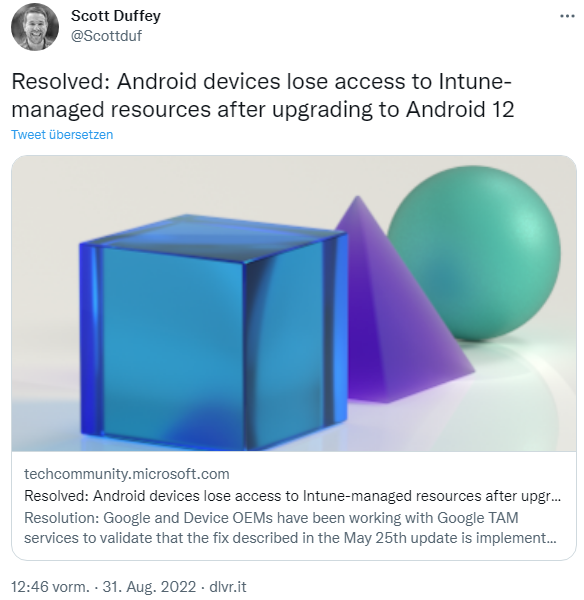 Google and the device OEMs have been working with Google TAM services to ensure that the fix described in the May 25 update is implemented for each of the affected brands (OPPO, OnePlus and Realme). By now, the fix should have been rolled out to all "S-product devices" of the OPPO, OnePlus and Realme brands, according to Microsoft. Therefore, there should no longer be any issues with devices accessing resources managed by Intune after upgrading to Android 12.

Microsoft recommends affected customers to install all new and available OTA updates. Since the OTA updates are rolled out at different times by the manufacturers, it may be necessary to ask Google or the support of the device manufacturers for the status. Was anyone affected by this bug?

This entry was posted in Android, devices, issue and tagged Android, Problem. Bookmark the permalink.