I had reported on the initial release of Windows 11 version 22H2 in the blog post Windows 11 2022 Update (22H2) released. Since that release, both installation ISO files (via Media Creation Tools) and an upgrade via Windows Update are available to lift compatible machines to the new build. Furthermore, blog readers have confirmed that the feature update will also be distributed via WSUS.

Microsoft has now announced on the Windows Release Health Status page that the next rollout phase has begun on October 4, 2022. While there was previously a quantity limit from Microsoft for systems that could be updated to Windows 11 22H2 during an update search, Microsoft is now expanding the whole thing. It states in this regard: 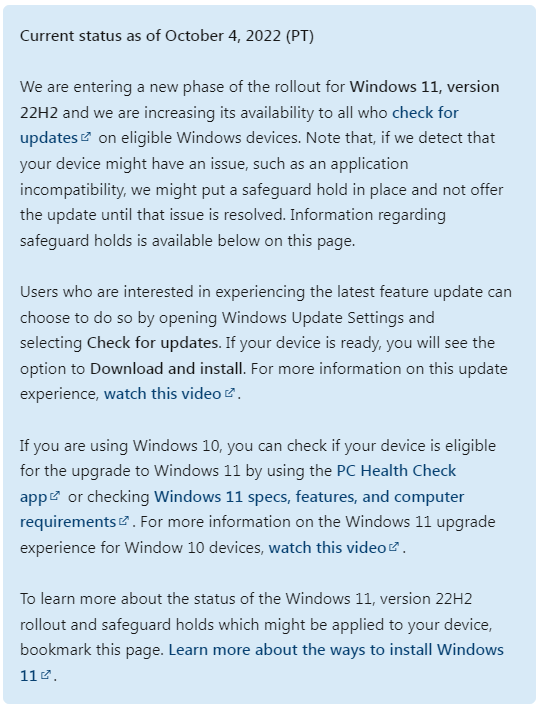 We are entering a new phase of the rollout of Windows 11, version 22H2, and are increasing availability for anyone checking for updates on eligible Windows devices. Please note that if we determine that your device has an issue, such as an incompatibility with an application, we may take a protective measure and not offer the update until the issue is resolved. You can find information about security measures further down this page.

The feature update will only be allowed on compatible machines. If Microsoft detects a compatibility problem on the machines, an upgrade blocker takes effect (e.g. incompatible printers or software). If you want to try whether your machine is compatible with Windows 11 22H2, you can open the Windows Update settings and select the Check for updates option. If the system is already for the feature update, the option to download and install this update will be displayed.

In Windows 10, the PC Health Check app can be used to check if the upgrade is possible. In the postWindows 11 22H2: Issues and upgrade stoppers I had listed some upgrade blockers. (via)

This entry was posted in Update, Windows and tagged Windows 11 22H2. Bookmark the permalink.