[German]After speculating about subscription and ad-financed low costs PCs from Microsoft, two annoying stories  about that came into my view. An ex-MVP colleague complained about annoying attempts by Microsoft to put Bing as a search engine in Edge. And a blog reader pointed me to an annoying notification about "PC Training" in Windows 20 21H2, but it doesn't work. I picked up these cases in a separate post to show the possible "future of Windows systems".

Yesterday I had reported in my German blog post Arbeitet Microsoft an abo- und werbefinanzierten Billig-PCs? (English version Is Microsoft working on subscription and ad-supported low-cost PCs?). There is a rumor that Microsoft is probably working on a new business model for low cost devices that are sold via subscriptions and subsidized via advertising. Shall be enriched with "the cloud" and Microsoft is looking for a product manager for it.

I'll combine below two small additions that show how Microsoft is once again being annoying (and where the journey could go with an ad-supported offering at the operating system level). Also, because some people at the German blog post linked above already salivated at the keyword "cheap" and shouted hurrah.

The first episode hit me just as I was checking Twitter to see what new news was out there. My ex-MVP colleague, Barb Bowman, just got all worked up on Twitter about Microsoft's behavior with Edge. 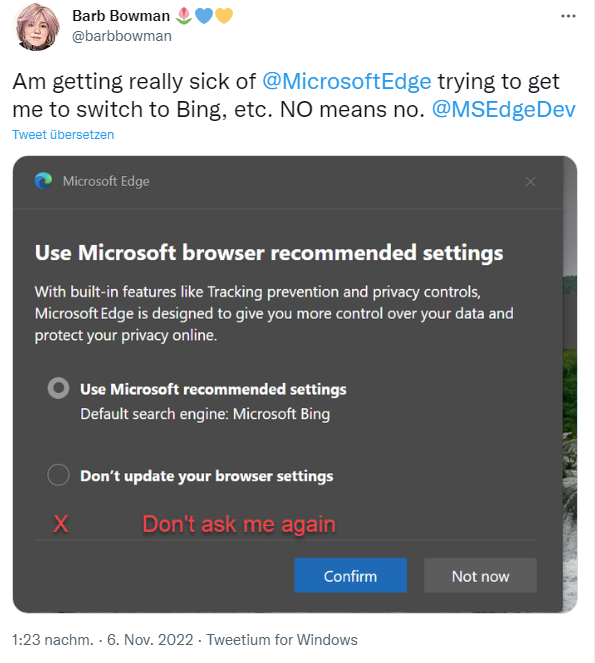 It's about the notification shown in the above tweet that Microsoft recommends "browser settings" – and that is to please use Microsoft Bing as the default search engine. I interpret Barb's tweet to mean that there is no "Don't ask me again" option, so this prompt to allow Bing as the search engine in Edge is more common. Has anyone struggled with this repeated prompt?

German blog reader Martin Fessler contacted me by mail yesterday about rather annoying notifications in Windows 10 about a "free video training". Martin wrote:

it was new to me that Microsoft offers free video training and advertises this (unfortunately) via the Windows notifications.

Martin then pointed me to this Microsoft Answers forum thread, where he also answered  the initial post. The thread starter Felix Kwok wrote about it:

How do you disable the "Schedule pc training session" notification?

Every few days or so I get a notification for "PC training" but I don't know what setting is causing this to happen. How do you disable this? When I click on the notification it doesn't even bring me to anywhere.

In classic Microsoft fashion (doesn't work, but is repeated again and again), the user gets this "PC training notification" every few days. When he clicks on the notification, nothing happens to him. The thread starter then posted another screenshot as an addendum and wrote that it must be coming from "Suggested".

The thread starter writes that the notification does not take him further when clicked. Martin Fessler writes in a reply in the thread that the Lern more button takes him to the Online Computer shopping appointments page (see the following screenshot). 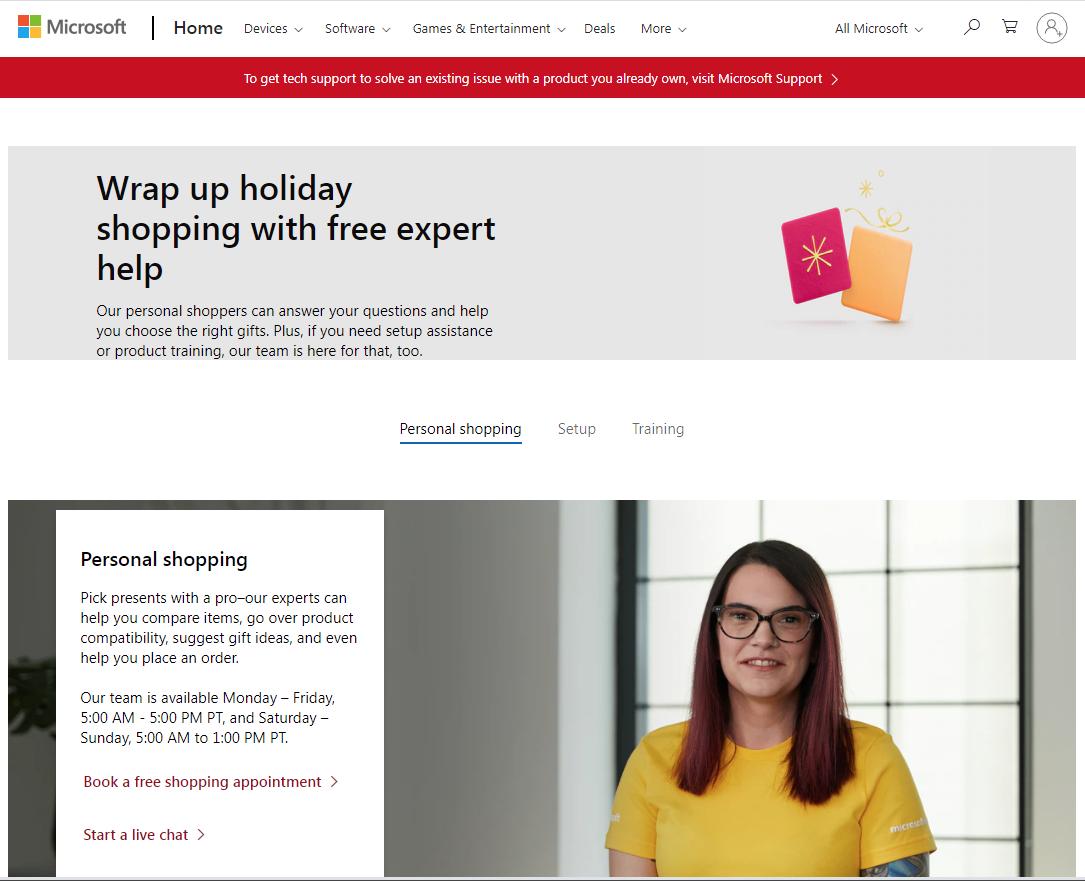 It is a store page operated by Microsoft USA, where people can get advice from "Microsoft's experts" when buying gifts. There are also two other entries hidden in the navigation bar, Setup and Training, where you can let these experts guide you through the setup and through a training. It is always offered to book a free setup or training appointment.

According to the motto: "Came to torture you", there is indeed a No thanks button in the notification window outlined above. However, I interpret the post in Microsoft Answers to mean that this notification is repeated to the affected person every few days. Martin Fessler added within a 2nd mail:

The notifications of the "Suggested" sender can of course be adjusted or turned off completely.

But it is still annoying that you are bothered with it at all.
Microsoft would be better advised to use the staff as product testers.

But we customers already do that – completely free of charge and (mostly) for nothing. :-|

Both cases seem to refer to English Windows versions (not sure about Edge). With the "PC training" it could be an A/B test for a few users, which will then be expanded before the holidays. Do any of you know more about the respective cases?