The Microsoft article Deprecated features for Windows client, which was last updated on November 2, 2022, also lists the Software Restriction Policies as deprecated. Until now, however, Software Restriction Policies (SRP) were still supported in Windows 10 as well as Windows 11 version 21H1. But with the discontinuation, administrators should have long been warned that this security feature will eventually fail.

SRP in Windows 11 22H2 without function

I just came across this on Twitter via the following Tweet from Will Dormann that Microsoft now has removed Software Restriction Policies (SRP). 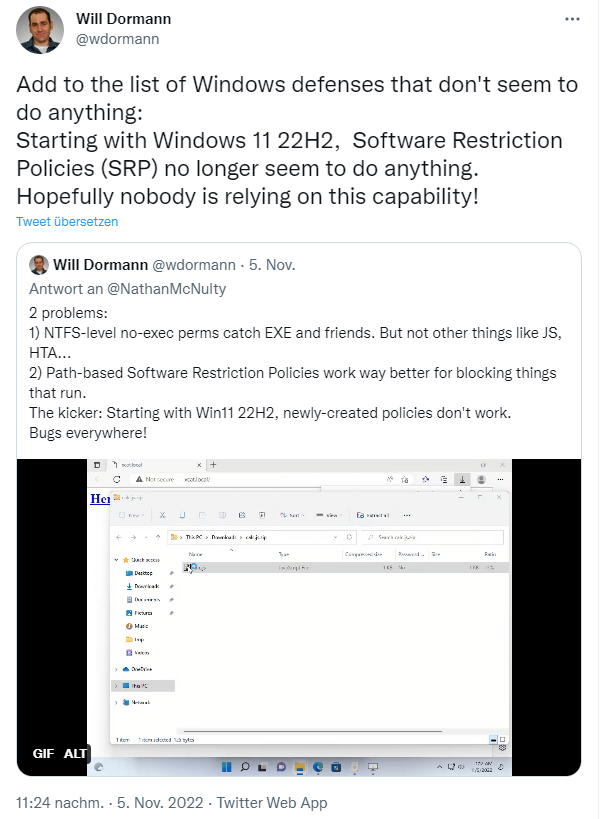 Addendum: After I published the German edition of this blog post first, I've got a discussion "Fake news, Software Restriction Policies (SRP) works as expected" within this blog. Especially my ex MVP colleague Mark Heitbrink commented, that his Win 11 22H2 system uses SRP as know before. Then I asked Will Dormann for details and he answered on Twitter:

Will Dormann has one machine, where SRP works, on all other systems SRP fails to block applications. I mentioned this behavior within my German blog post, and know I got two other independent confirmations. German blog reader Johannes commented here:

I ran across the same problem in mid-October and was able to figure out that SRP on Win11 22H2 Pro did not work for me: see the forum entry (German) Richtlinien für Softwareeinschränkungen werden nicht angewendet.

After I contacted Mark Heitbrink again, he did run another test case and came back with the following German comment:

New installation, standard ISO, no volume CD, installation Professional Edition in Workgroup and in AD. SRP policies "All files, All users and certificates", set of rules: %userprofile%\*.exe, %userprofile%\*\*.exe = not allowed. both in AD and LGPO.

Shock: files are NOT blocked.

My first look was at my existing installation which was updated to 22H2. There SRP is still active.

So after all, the observation, Will Dorman has mentioned on Twitter, has been confirmed from more users. German blog reader David Xanatos suspected, that it has something to do with Smart App Control. He told me, that Smart App Control internally exactly seems to be realized via SRP – at least if that feature is not switched off, all processes access "\Device\SrpDevice". David did a test in a fresh Windows 11 22H2 VM and wrote:

I tested this in a virgin VM, and when SAC is on it is not possible to run anything unsigned, not even self-signed. Even if you import the used certificate into the corresponding trusted root cert lists, SAC gets in the way.

Might be an explanation for the behavior observed by several Windows 11 22H2 users.

Will Dormann writes that the list of Windows security/defense measures that seem to do nothing is now quite long. A new addition is the Software Restriction Policies (SRP), which don't seem to do anything as of Windows 11 22H2. He concludes by saying, "Hopefully no one relies on this feature!". I assume that the blog readers has long been aware and has said goodbye to Software Restriction Policies. If not, keep this trap in mind when using Windows 11. Let's see when the feature is removed from Windows 10.