Yesterday (June 23, 2017) evening at 8:13 PM I received a short e-mail from Microsoft with the following content.

No more details or links was given, so I decided to let things rest till next morning.

After searching the Internet for CVE-2017-8558, I read, that this Common Vulnerabilities and Exposures addressed a vulnerability in Microsoft Malware Protection Engine. CVE-2017-8558 describes a critical vulnerability, where attackers can use remote code execution via a network.

Tavis Ormandy has detected the vulnerability

Tavis Ormandy has posted this tweet on June 7, 2017 with a hint to a vulnerability.

Sigh, more critical remote mpengine vulns. Found on Linux then reproduced on Windows, full report on the way. This needs to be sandboxed. pic.twitter.com/OzarAmOyH1

The details may be found within the Chromium bug tracker. Tavis posted also a test case.

I discussed Microsoft’s “apicall” instruction that can invoke a large number of internal emulator apis and is exposed to remote attackers by default in all recent versions of Windows. I asked Microsoft if this was intentionally exposed, and they replied “The apicall instruction is exposed for multiple reasons”, so this is intentional.

This full system x86 emulator runs as SYSTEM, is unsandboxed, is enabled by default and remotely accessible to attackers.

I took a quick stab at writing a fuzzer and immediately found heap corruption in the KERNEL32.DLL!VFS_Write API, I suspect this has never been fuzzed before.

Then I found at vuldb.com the information, that library file mpengine.dll was vulnerable. Ormandis could use further API calls. In an unkonwn function he found a critical vulnerability. This vulnerability allows to create a buffer overflow, so an attacker can misuse Microsoft’s Malware Protection Engine up to module version 1.1.13804.0 (32 bit) for remote code execution via network. Later I found Microsoft’s CVE-2017-8558 page, giving more details.

A remote code execution vulnerability exists when the Microsoft Malware Protection Engine does not properly scan a specially crafted file, leading to memory corruption. An attacker who successfully exploited this vulnerability could execute arbitrary code in the security context of the LocalSystem account and take control of the system. An attacker could then install programs; view, change, or delete data; or create new accounts with full user rights. 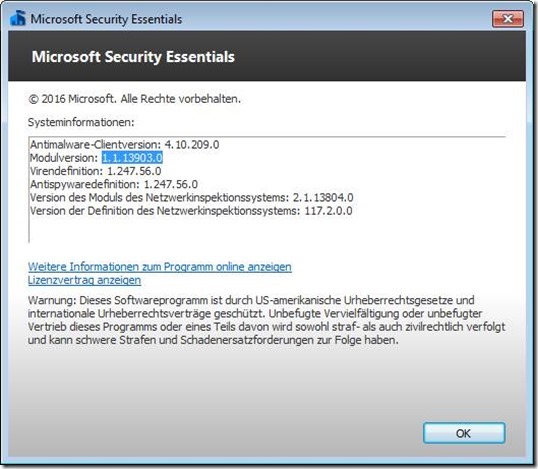 I checked my Microsoft Security Essentials – which reported module version 1.1.13903.0 for Microsoft’s Malware Protection Engine auf. It’s the next critical fix for MsMpEng in a row of fixes within a few weeks.