[German]Since Microsoft’s November 14, 2017 update for Windows Epson dot matrix printers are no longer able to print. The print jobs end with “Win32 error code returned by the print processor: 2147500037”. This affects all printer models under Windows 7 to 10. The problem is now confirmed by Microsoft and there are workarounds/fixes.

I was alerted a few days ago by blog readers and I’ve addressed this issues within my blog post Issues with Microsoft’s November 2017 Updates.

As part of my follow-up routine, I just did a web search about the topic and discovered that Microsoft has now confirmed the problem. In KB article KB4048955 for Windows 10 V1709 Microsoft confirms the issue.

After installing this update, some Epson SIDM and Dot Matrix printers cannot print on x86 and x64-based systems.

Microsoft wrote in a supplementary explanation that the cause was found together with Epson.

Microsoft and Epson have determined the cause of the issue and are working on a solution. This problem is not related to the printer driver, so installing current or older print drivers will not resolve the issue.
Microsoft will provide an update in an upcoming release.

It is interesting to note that according to the above text it should definitely not be related to the printer driver. The installation of the old printer driver should not solve the problem. The bad news is, that Microsoft won’t give the fix a high priority, so many business users related to Epson dot matrix printers are facing a real problem. Therefore I propose some Workarounds.

Workaround #1: Uninstall and block the update

There is one workaround, that should bring the printer back in operation: Just open an administrative command prompt (using Run as administrator) and execute the following command:

After uninstalling the update, it’s necessary to block a re-install. In Windows 7 SP1 and Windows 8.1 this can be done in Windows Update window via context menu command Hide. In Windows 10 use the advices given within my blog post How to block Windows 10 updates.

Microsoft says in a KB article (see above), that the printer issue isn’t related to the printer driver. But I found users writing, that re-installing the ‘right’ printer driver, should fix that issue. I can’t test it, because I don’t own a dot matrix printer anymore. Nevertheless try the following approach: 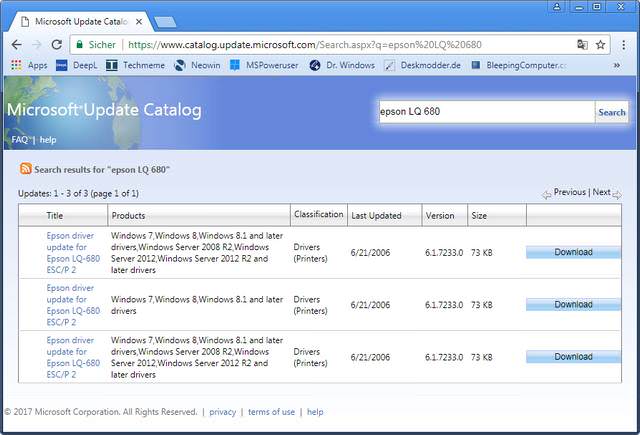 Reboot your system and check, whether the Epson printer works again. If that helps, please left a comment – I can’t test it here.

I got mixed feedback – whilst one user posted in a German forum, that he was able to fix his dot matrix printer issue with the above aproach, other users reported, that the Microsoft driver doesn’t help. So, give it a try.

And I got a really strange feedback from another German user. He has a Epson Stylus Color 880 printer that also refuses to print. Although the printer won’t run, he is able to run the printer diagnostics to clean the ink outlet.