[German]A brief note for users of Windows 7 SP1. The night Microsoft has once again rolled out the Windows 7: New notification update KB4493132. Here is some information about the update.

Today I already got a mail from blog reader Hans T. that the update KB4493132 had hit him. Also in this comment Gero S. reports the same (thanks to the readers for the hint). I then checked my system under Windows Update – Update KB4493132 is available as an optional offer. 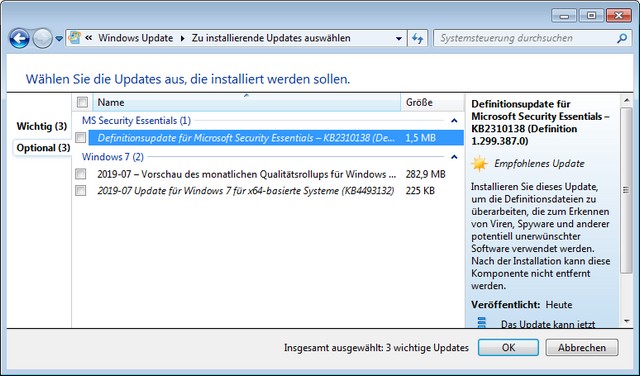 It’s been known for a long time: Windows 7 will automatically receive updates via Windows Update for the last time on January 14, 2020. I recently had addressed this within my blog post: Windows 7: Support ends in 6 months.

Only for companies and public authorities Microsoft offers a paid extension of support until January 2023. The program is only available for companies that use Windows 7 Professional and Windows 7 Enterprise (Windows 7 Ultimate already drops out). The respective clientele receives the offer for ‘Windows 7 Extended Security Updates (ESU)’ only if there is a volume license agreement (get a discount with Software Assurance) I had reported in the blog post Wow! Windows 7 get extended support until January 2023.

The prices are also quite steep, as I explained in the blog post Prices for Windows 7 Extended Security Updates till 2023.

Whether there is still the possibility for small companies and home users to download updates for Windows 7 Embedded via the Microsoft Update Catalog until October 2020 and install them manually, as indicated here, has to be seen. I currently think it’s very likely that this will work.

The so-called notification update KB4493132 for Windows 7 SP1 was first released by Microsoft on March 22, 2019. This is intended to inform the owner of a Windows 7 system about the end of support for this operating system in the coming months.

The screenshot above shows the English version of the Nag screen. Microsoft wrote about that:

After 10 years of servicing, January 14, 2020, is the last day Microsoft will offer security updates for computers running Windows 7 SP1. This update enables reminders about Windows 7 end of support.

I covered this and other information in the blog post Windows 7 Notification Update KB4493132 released. And two brief pieces of other information: The update will be distributed cyclically, but only for home and ultimate-owners! Company computers with Windows 7 Pro and Enterprise are not included. For interested readers: A summary can be found in the blog post Windows 7: Details about notification update KB4493132. There are also hints on how to block notifications and the update.