The update to iOS 13.1.1 was released by Apple at the end of September 2019 to fix some bugs. Apple had to release bug fix update iOS 13.1.2 a few days later. Arstechnica has an article about that topic.

In the meantime, I have received two reports from blog readers reporting problems related to this update.

German blog reader Tom B. already sent me an email on September 28, 2019 with the note: Since iOS 13.1 Outlook reminders are no longer updated on the iPhone. But it’s probably already known. Was not known to me, because I am not up to date regarding iOS 13 anymore. The question: Did iOS 13.1.2 fix this and did someone else experience this?

Yesterday German blog reader Frank M. sent me a mail about another problem with iOS 13.1.1. Frank writes that he came across a very unpleasant problem at work and sent me the following information (I’ve translated his message):

After some Apple iPhones have upgraded to iOS13.1.1, they cause our Exchange Server 2010 to generate extremely many 1 MB log files (transaction log files), sometimes more than 1 file per second on average!

As a result, over 48,000(!) log files with a size of almost 50 gigabyte(!) were created today alone, and the Exchange server is therefore full (we’re talking about almost 40 email mailboxes and a total mailbox database size of around 90 gigabyte, so no extremely large Exchange database.

Frank sent me the following screenshot, which shows the many files in the log folder. 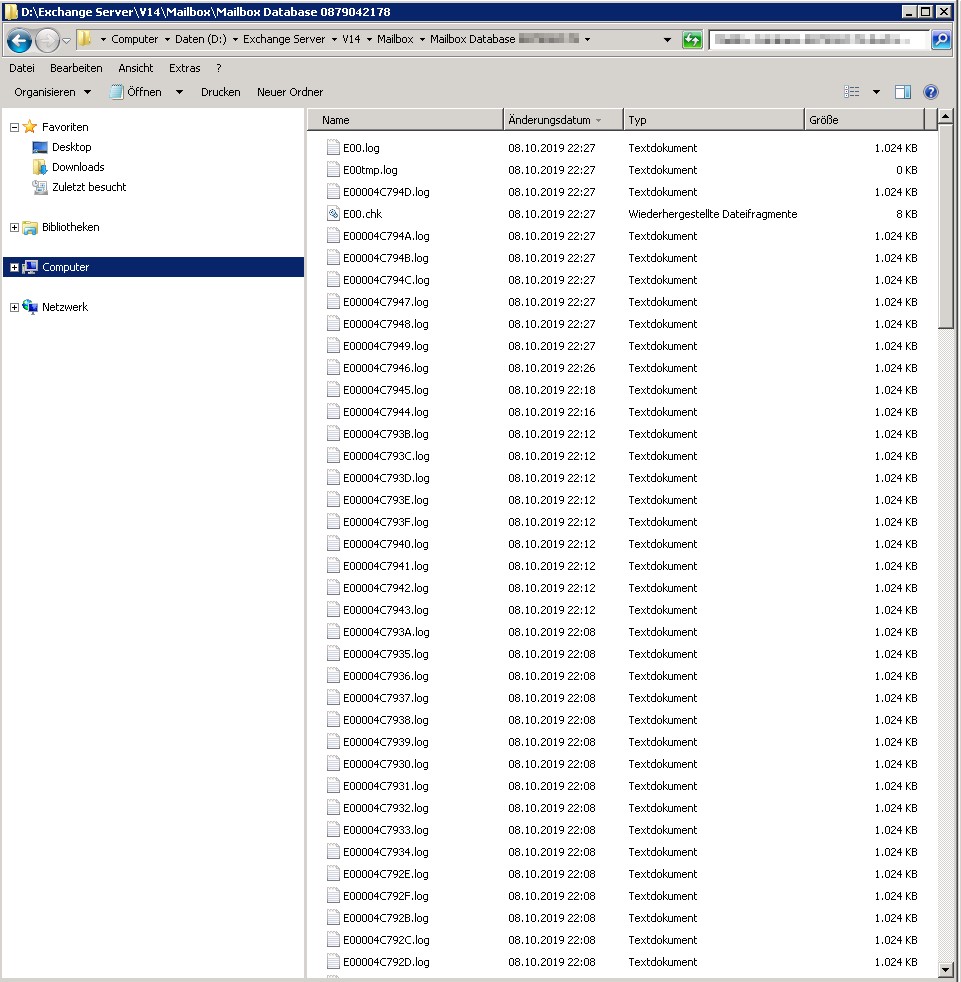 Frank isn’t affected alone. He sent me this link where the problem is discussed in the Technet forum.

Remember the issue back in 2012-2013 where devices using IOS 6.1 would rapidly fill Exchange Server logs?

Upgraded two iPhones and an iPad yesterday to IOS 13.1 and IPadOS 13.1. Suddenly the Exchange log files filled up within 3 hours, where they never fill up during the course of a day. We run a Veeam backup each evening which also resets the logs, but they’re now filling up within hours before the evening’s backup can run.

Short of denying our Apple users of syncing with the Exchange Server (not an option), what else can we do?

There are other users who confirm the bug – and there is a hint that you should use the Outlook app. If this helps, I don’t know – disabling ‘Active sync’ will definitely stop the log file folders on the Exchange server from filling up.

Frank also sent me the link to this thread at German forum administrator.de, where users are discussing about bugs in iOS 13.x and some people reported the same. The issue has probably already occurred since iOS 13.1.

This entry was posted in devices, issue, Update and tagged iOS, issues, Update. Bookmark the permalink.