As of January 14, 2020, support for Windows 7 SP1 will end and the operating system will no longer receive security updates. The only exceptions are systems where support is still purchased through the Extended Security Update (ESU) program. However, this is well known. It is also known that systems with Windows 7 Home Premium have been reporting this end of support since April 2019 (see my blog post Windows 7 shows End of Support notification as well as in other blog posts on the subject).

What is new is that Microsoft now wants to display this notification for systems with Windows 7 Professional. I had mentioned that within the blog post Windows 7 Pro users receiving notification about support end. The post was based on an articles from Mary Foley, who noticed that Redmond had added the following addition to this Microsoft post.

Oct. 15, 2019 – We are now extending the notifications discussed below to Windows 7 Pro devices to ensure our customers are aware of the end of support for Windows 7 and can take action to remain productive and secure.
Devices that are domain-joined as a part of an IT-managed infrastructure will not receive the notifications.

But at the time writing the blog post, no details are known. It was not clear if, when the notification will be displayed and and which update is resposnsoble to activate the screen. For Windows 7 Home Edition the update KB4493132 is responsible for the notification. 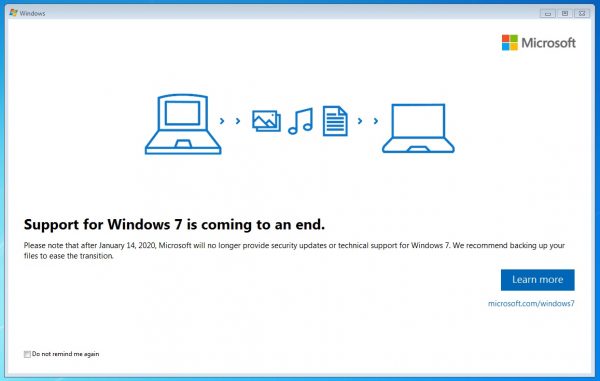 In companies with managed environments, the machine should not receive any notifications. Microsoft writes about this: After installation, this update performs additional checks and does not display notifications for domain-bound devices, kiosk mode devices, or devices that have previously disabled free upgrade notifications about registry settings.

Block the notification via registry entries

Microsoft has published hints in KB4524752 how to suppress the EOL notification on Windows 7 Professional machines. Use the registry editor with administrative privileges and navigate to the following key:

and add a 32 bit DWORD value DisableGwx hinzuzufügen and set it to 1. Then navigate to the key:

and add a 32 bit DWORD value DisableOSUpgrade and set it to 1. These seem to be partly the same entries that prevented an upgrade from Windows 7/8.1 to the new Windows in the first year after the release of Windows 10.

Microsoft recommends that you do not uninstall the update. If the update is installed automatically, the update will be reinstalled during the next update scan.