Windows 10, version 1909 is available for any user on a recent version of Windows 10 who manually selects “Check for updates” via Windows Update. The recommended servicing status is Semi-Annual Channel.

Beginning today, we will slowly start the phased process to automatically initiate a feature update for devices running the October 2018 Update (Windows 10, version 1809) Home and Pro editions, keeping those devices supported and receiving the monthly updates that are critical to device security and ecosystem health. We are starting this rollout process several months in advance of the end of service date to provide adequate time for a smooth update process.

Microsoft apparently defines the Windows 10 November 2019 update (version 1909) released on November 12, 2019 as sufficiently stable. Threrefore they announced that the phased delivery on machines with the older Windows 10 version 1809 (October 2019 update) will begin slowly. Woody Leonhard has spotted that, and also Bleeping Computer has an article.

What this means in practice

At Microsoft, the term ‘forced update’ means that the Windows 10 November 2019 Update (Version 1909) can be automatically offered as a feature update to all machines that are still running Windows 10 Version 1809 (October 2019 Update) without an update search. 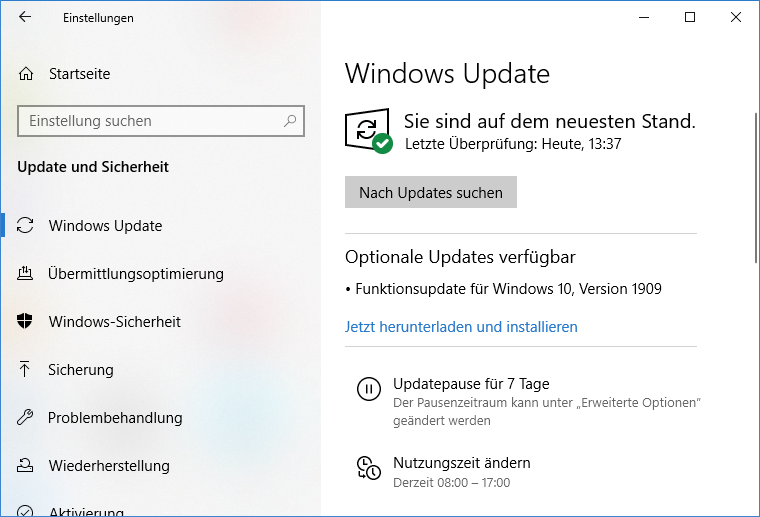 This option to trigger a download of a feature update has been integrated in Windows 10 Version 1903 first. But it should have been available via a cumulative update in Windows 10 October 2018 Update (V1809).

The user can therefore suspend the installation of the feature update until the end of the support period. Only then will Microsoft begin the forced upgrade to Windows 10 Version 1909. I had spread out the details in the blog post Windows 10 May 2019 Update brings back Update control.

Remarks about the Upgrade

When upgrading from Windows 10 version 1809 to version 1909, a complete installation image (approx. 3.5 GByte) is downloaded from the Microsoft update servers (see also the blog post Windows 10 V1909 released, how to get this update?). The delivery method for upgrading from version 1903 to 1909 (see Insides: Windows 10 19H2 development/deployment (V1909)) cannot be used. So there is no change in the experience from installing earlier feature updates for Windows 10.

In general, the upgrade process takes place in waves. Microsoft offers the update to the machines with the highest compatibility. If there are issues, Microsoft notices this via telemetry and stops the rollout of the feature update to version 1909. After the issues are removed, upgrade block is lifted and the rollout is released again for the respective machines.

Microsoft uses a machine learning algorithm to distribute and control the upgrade process. If a Windows 10 machine is definitely known to be incompatible, Microsoft will block the feature update via its machine learning based update distribution mechanism. The user should then see a hint of a problem on the Windows update page – the following screenshot refers to Windows 10 Version 1903. 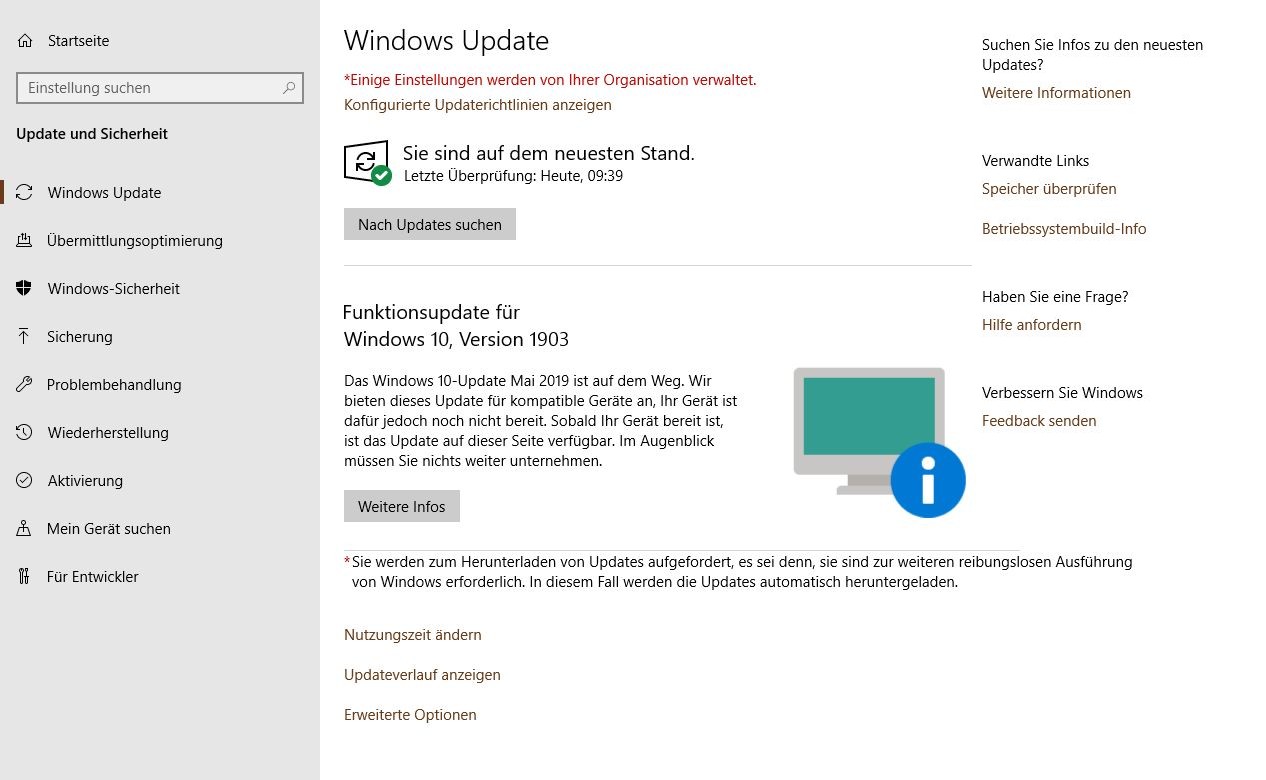 I had explained details and background information on this rollout process in the blog post  Windows 10 up to V1803: Details for Upgrade to V1903 – Part 2.

Should I now install the November 2019 update?

The availability of the Windows 10 November 2019 Update (Version 1909) for widespread use (Force Update) does not mean that you have to install it. Microsoft admits to the users that the installation of feature updates is postponed until the end of the support with updates (see the blog Windows 10 May 2019 Update brings back Update control).

So if you still fear issues with hard- and software or have other reasons (e.g. unfixed bugs), you don’t need to upgrade yet. Microsoft provides security updates for the Home and Pro versions of Windows 10 for a period of 18 months. This means end of life for Windows 10 version 1809 is May 12, 2020 for Home and Pro editions.

This entry was posted in Update, Windows and tagged Windows 10 V1809. Upgrade. Bookmark the permalink.