[German]Microsoft has begun rolling out the new Chromium-based Edge Browser on systems with Windows 10 version 2004 on Sept. 14, 2020. A re-release of update KB4576754 pushed this browser again to consumer systems.

I had already wrote about the cumulative update KB4576754 in the blog post  Windows 10 Version 2004: Update KB4576754 on September 3, 2020. After a test phase with Windows insiders, the patch was rolled out on Windows 10 version 2004 (and its server counterparts) in early September 2020. The update was offered at that time without a KB article with details released.

The update is therefore not intended for Windows 10 systems in a enterprise environment – Microsoft does not want to upset its customers. It is rather tested on private users with Windows 10 Home. According to the KB article, the update brings some quality improvements due to the new browser and includes the features to set up the Chromium Edge as the default browser on the system.

Thanks for the explanation and in the meantime I have installed the update KB4576754. It installs the new Edge Chromium Browser. I still had the “old” Edge installed.

The whole thing is still strange, because I am running the Enterprise version and it is the case that the Chromium is NOT installed automatically by Microsoft, but has to be downloaded and installed actively. Or am I wrong?

In this comment Matthias reported also about trouble with the new Edge-Browser.

At the end of July 2020 Microsoft had revealed its plans for the rollout of the new Chromium Edge in the Techcommunity article Upgrading to the new Microsoft Edge through Windows Update (expanded).

According to reports from US sites like Softpedia (see Tweet) or howto edge Microsoft has re-released the update KB4576754 again for Windows 10 version 2004. This will force consumer machines running this Windows 10 version to update to this new Chromium based browser. 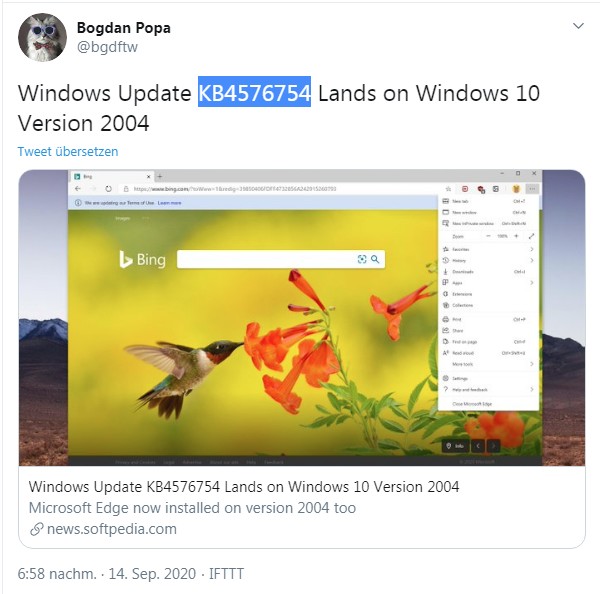 It could be related to the fact that the Windows 10 20H2 build, expected in the fall of 2020, is nearing completion and Microsoft wants to make sure that all systems with Windows 10 20H1 build (2004 version) have the new Edge installed. In addition, Microsoft has announced the end of support for the old Edge browser in 2021 (see End of support for Internet Explorer 11 in Microsoft 365 and old Edge in Windows 10 from 2021) and intends to roll out the Chromium Edge in companies (see Microsoft Edge upgrade to be extended).

Anyone who was offered this update on September 14, 2020? My Windows 10 machine has had the new Edge browser installed for some time.