[German]Microsoft has released out-of-band security updates for the PrintNightmare vulnerability (CVE-2021-1675) in the Windows Print Spooler service. But these updates seem to end in chaos – it reminds me on the Printer-Gate in March 2021, where Microsoft had to release a series of update fixes to close a printer vulnerability but still allow printing. I'll summarize a few points outside of Microsoft's documentation in this blog post. These range from the fact that the updates don't close the vulnerabilities, to installation issues and problems with Zebra label printers subsequently refusing to print.

In all versions of Windows a Remote Code Execution (RCE) vulnerability CVE-2021-1675 exists in the Windows Print Spooler service. This allows attackers to execute arbitrary code with SYSTEM privileges. After a proof of concept (PoC) became public, there were already first attacks against the vulnerability. I had reported early on about the vulnerability in the blog post PoC for Windows print spooler vulnerability public, high RCE risk. Then, as of July 6 and 7, 2021, Microsoft also released unscheduled updates for supported versions of Windows (see links at the end of the article). 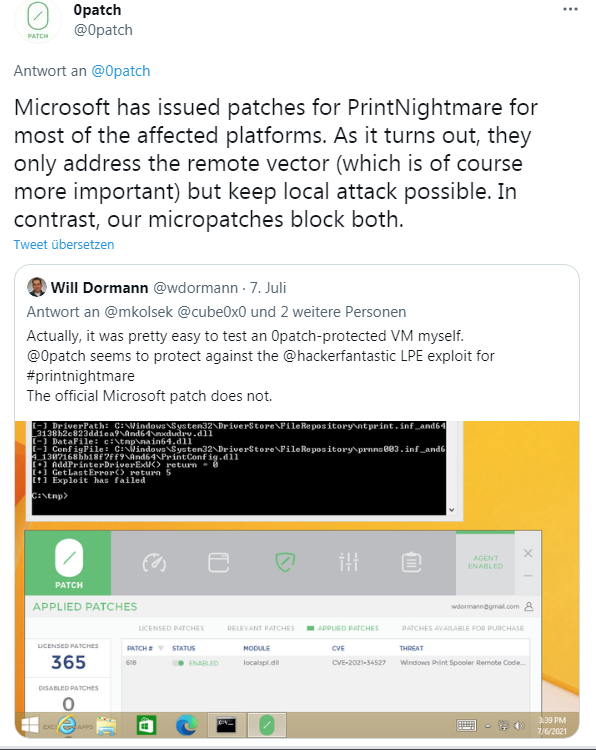 Now Microsoft has released special updates for this vulnerability CVE-2021-1675. But a few days ago, other newly discovered vulnerabilities in the Windows Print Spooler service became known. And the out-of-band updates do not close these vulnerabilities, allowing attackers to exploit the changes made by the updates. German blog reader Carsten already pointed out the above tweet in a comment. 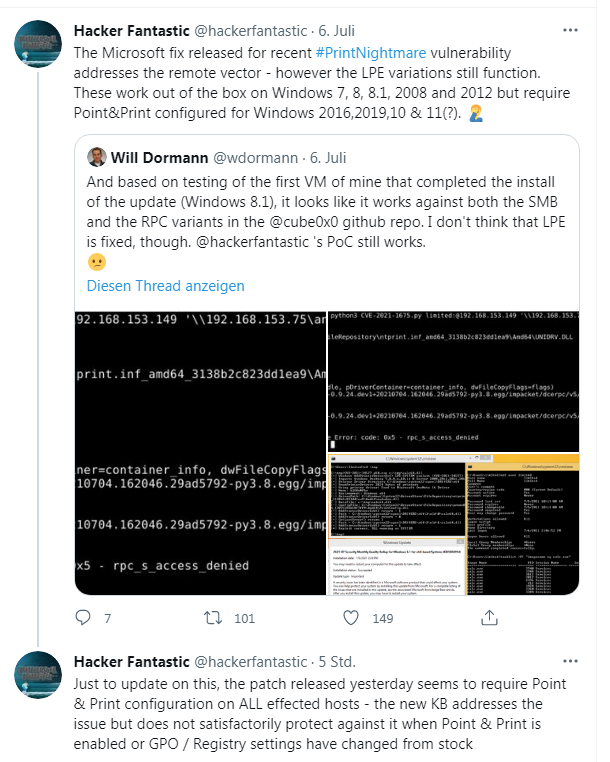 The tweets above again point this out, and colleagues at Bleeping Computer have addressed it here, while The Hacker News tweeted it here and has published this article. 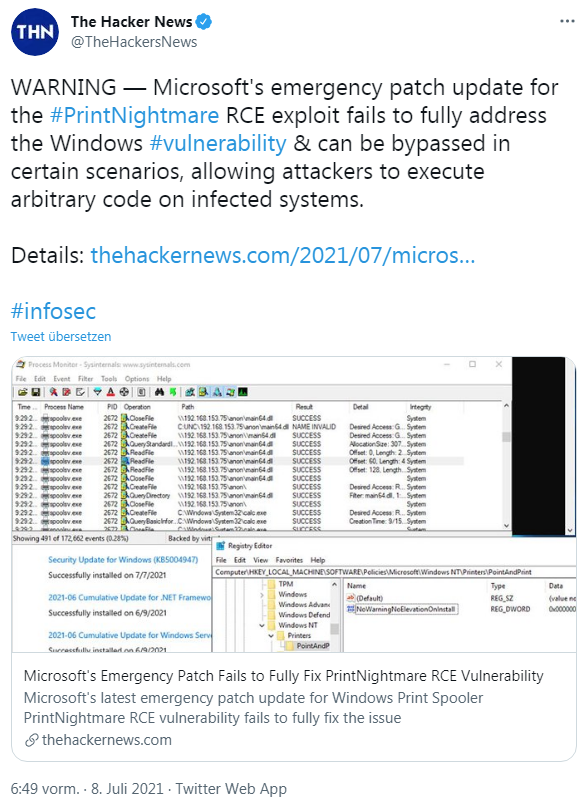 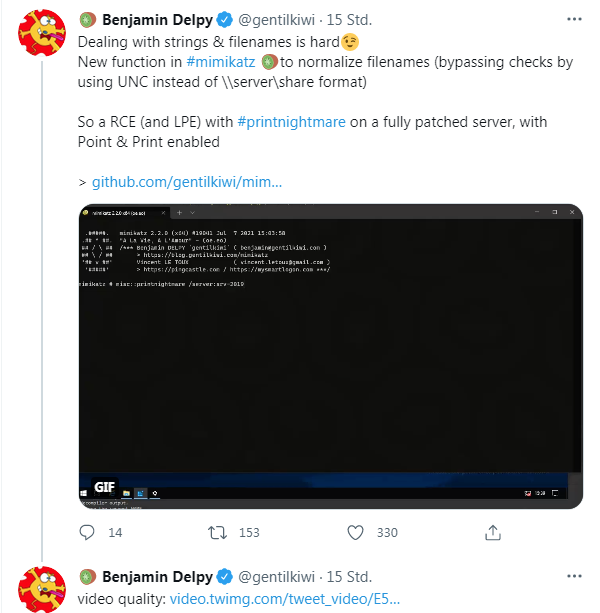 Delpy posted a flowchart of by-passing options in this tweet. Microsoft's patches are working, but not really. Attacks on remote targets with \ \ in the URL are now prevented by a check, to be sure. However, if the attacker uses patterns like \ ?? \ in the UNC paths, attacks are still possible.

Addendum: Microsoft has released a statement, claiming, that things raised the above are just a wrong configuration (see Microsoft on PrintNightmare vulnerability CVE-2021-34527: Windows is secure after patch).

The updates cause problems

Actually, everything urges to install the unscheduled updates urgently. In the meantime, however, I have received initial feedback about problems, which I will briefly summarize.

In this German comment within my blog, a reader reported, that he has problems with detection in WSUS. Here's an excerpt:

I had pointed out the problem of the Servicing Stack Updates (SSU) integrated in the cumulative update (LCU) in the blog post Windows 10, the WSUS and the SSU+LCU detection chaos. There are more voices on this topic in the linked comment thread – without the required SSU from May 2021, cumulative updates from June 2021 in WSUS probably can't be installed in Windows 10 version 2004 and higher. A solution for those affected can be found in this comment here on the blog.

Already directly after the release of the first out-of-band updates, German blog reader Sebastian got in touch in this comment and writes:

Intermec EasyCoder F4 and PF4i … are just clarifying what is going on.

Otherwise everything is ok so far (Canon, HP, Epson).

They wasn't able to use the label / ticket printer after installing the update. At German site heise I found a forum thread, where users confirming striking Zebra label printers (D420, Zebra 2844, Intermec PF4i and PM43). It looks like only uninstalling the update in question can fix this problem.

On Facebook, I have received feedback from a IT specialist, telling me, that he has already had two customers with BlueScreens when printing through update KB5004945, as in March 2021. Details are not yet available – perhaps there the attention on it and give feedback here as a comment if necessary, if it occurs with you. Addendum: Got now a ton of feedback within the German blog, where users observed bluescreens with different printers.

My advice to administrators is, to use the English kb articles about all PrintNightmare issues and updates. We have the situation, that the German kb article about "Point and Print" is simply wrong and gives advices, that deactivated the feature. In this German comment, Stefan A. points out that Microsoft's German documentation on "Point and Print" is wrong. Hanspeter Holzer explicitly points this out again in the following tweet. 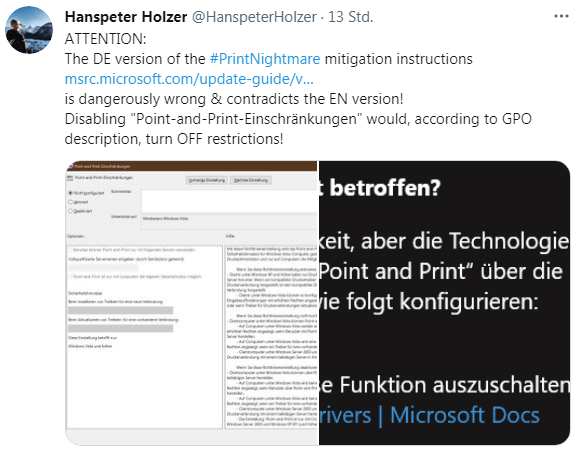 Use the support article KB5005010: Restricting installation of new printer drivers after applying the July 6, 2021 updates, to set the relevant policy entries.

Here in the blog I had discussed the micropatches from 0patch to close the vulnerability (see following link list). This solution was available before the Microsoft updates and probably does not have their consequences. So if you rely on 0patch, you should heed the following tweet (thanks to Carsten). 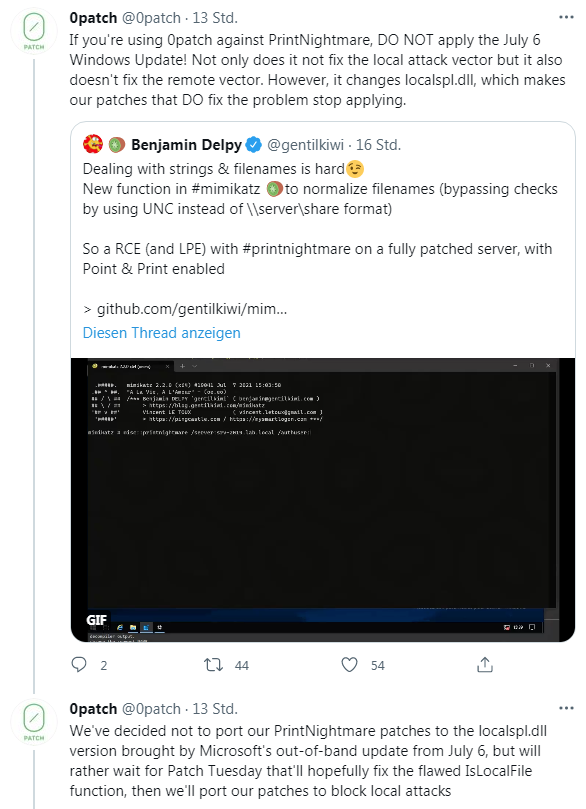 Windows vulnerability PrintNightmare: It's not over yet (July 15, 2021)