[German]Regarding the problem, originally called PrintNightmare, that Windows systems are vulnerable via the print spooler service, there is a new warning. A remote print server that can be accessed by unauthorized parties allows arbitrary malicious files to be installed on clients via point-and-print. The US-CERT has issued a new warning about this. However, there is a possibility to mitigate this vulnerability via group policies.

I had some articles about the PrintNightmare vulnerability here in the blog, see link list at the end of the article. Microsoft has released updates to close the vulnerabilities – but security researchers have discovered new attack capabilities that bypass the patches within hours. Until now, I always thought that an attacker would have to provide at least a signed printer driver to exploit the PrintNightmare vulnerability. Now it crystallizes that arbitrary files can be submitted to clients as a by-product of a signed WHQL driver.

I had pointed out in the post Windows vulnerability PrintNightmare: It's not over yet (July 15, 2021) that Benjamin Delpy has meanwhile published several variants of the attack possibilities on the printer interface, but I did not pay further attention to it. I only became aware of the issue again via the post by the colleagues at Bleeping Computer. 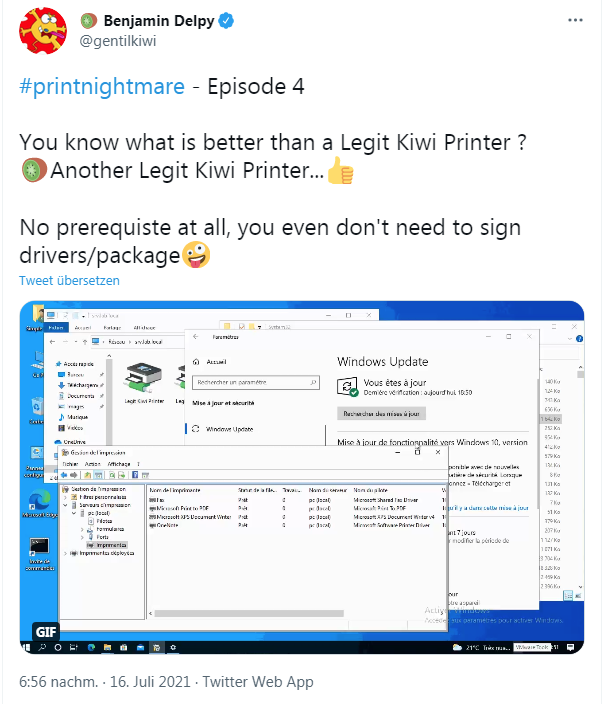 In the above tweet, mimikatz developer Benjamin Delpy points out a new attack vector via another vulnerability in the Windows Print Spooler service. Through it, third parties could use a remote server to gain administrative privileges on a Windows machine via the Queue-Specific Files feature.

Delpy has created a publicly available remote print server (see this tweet),that can be used to test the vulnerability demonstrated above. When a Windows client prints through the print server, a missing printer driver is installed via point-and-print. Although a signed printer driver is required for installation. However, Delpy mentioned a special Installing Queue-Specific Files point-and-print feature to Bleeping Computer.

During printer installation, a vendor-supplied installer application can specify a set of files of any type to be associated with a specific print queue. The files are downloaded to any client that connects to the print server. If a malicious DLL is distributed there as well, an attacker could then use it to gain SYSTEM privileges on the Windows client. Will Dormann has meanwhile published this US-CERT warning with some explanations of the situation.

In the US-CERT warning Will Dormann shows two approaches to make it more difficult for attackers to exploit this vulnerability.

Since attackers use SMB to connect to a malicious shared printer for their exploits, the vulnerability is very easy to mitigate. It is simply a matter of blocking outbound SMB access at the boundary of one's network. Then the remote print server can no longer be reached, even if an attacker might try to access the printer locally. Note, however, that printers can be shared via the [MS-WPRN] Web Point-and-Print protocol. This allows the installation of arbitrary printer drivers without relying on SMB traffic. Also, an attacker local to the network could share a printer via SMB that would not be affected by outbound SMB traffic rules.

In Microsoft Windows, there is a group policy called "Package Point and Print – Approved servers" that has entries in the registry values: