[German]Cisco Talos security researchers have discovered that the Babuk ransomware gang is using the ProxyShell vulnerability in Microsoft Exchange to install a web shell called "China Chopper". A Babuk ransomware partner named "Tortilla" probably joined the group in October and is deploying this web shell. The ProxyShell vulnerability can be closed long ago by updates on on-premises Microsoft Exchange servers.

I became aware of this threat via the following tweet from Bleeping Compute. Cisco Talos describes the issue in the blog post Microsoft Exchange vulnerabilities exploited once again for ransomware, this time with Babuk. A summary is available at Bleeping Computer. 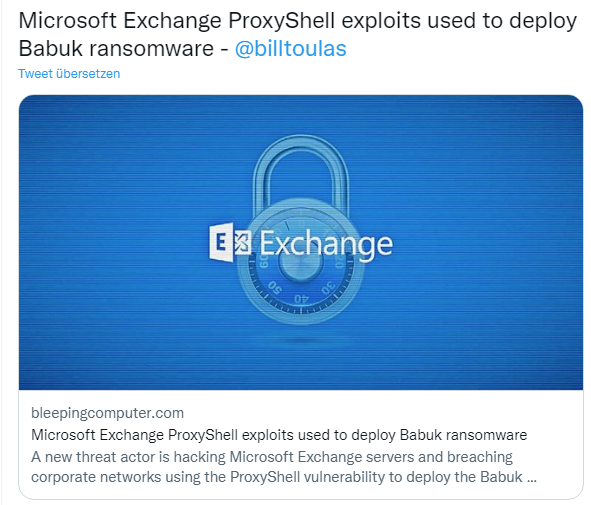 On October 12, 2021, Cisco Talos security researchers came across a campaign targeting vulnerable Microsoft Exchange servers via telemetry data from their security solutions. The campaign attempts to exploit the ProxyShell vulnerability to deploy the Babuk ransomware on victims' Exchange servers.

The campaign, which deploys variants of the Babuk ransomware, mainly affects users in the US. However, there are also a smaller number of infections in the UK, Germany, Ukraine, Finland, Brazil, Honduras and Thailand.

The actor of the campaign, based on the names of the payload files used in the campaign, is named Tortilla by Cisco Talos. It is a new actor that has been active since July 2021. Prior to this ransomware campaign, Tortilla experimented with other payloads, such as the PowerShell-based netcat clone Powercat, So we known to give attackers unauthorized access to Windows machines.

Security researchers are reasonably certain that the initial infection vector is the exploitation of ProxyShell vulnerabilities in Microsoft Exchange Server through the use of China Chopper Web Shell, the blog post in question states.

The Babuk ransomware module running inside the AddInProcess32 process enumerates the processes running on the victim's server and attempts to disable a number of processes related to backup products, such as the Veeam backup service. It also deletes Volume Shadow Service (VSS) snapshots from the server using the vssadmin utility to ensure that the encrypted files cannot be recovered from their VSS copies.

The ransomware module encrypts the files on the victim's server and appends a .babyk file extension to the encrypted files. The actor requires victims to pay $10,000 to get the decryption key to restore their files. More details can be read in the post Microsoft Exchange vulnerabilities exploited once again for ransomware, this time with Babuk.

Regarding the facts of the case, it should be noted that the ProxyShell vulnerability has long been closed by Microsoft updates. And the vulnerability of unpatched Exchange servers is also well known. Taiwanese security researcher Orange Tsai from the DEVCORE team gave a presentation on Exchange vulnerabilities at BlackHat 2021 in early August. He showed how by combining old vulnerabilities (e.g. CVE-2021-34473, CVE-2021-34523 and CVE-2021-31207) that were closed by updates in April 2021, Microsoft Exchange servers can be attacked and taken over via exploits called ProxyLogon, ProxyOracle and ProxyShell.