[German]On January 11, 2022 there was a security update for Adobe Acrobat (Reader) DC to version 21.011.20039. Furthermore, the last few days some users have contacted me to report open bugs. Here's an overview about that topics.

Adobe has released a security update for Adobe Acrobat (Reader) DC to version 21.011.20039 as of January 11, 2022, which is intended to patch vulnerabilities considered critical, important and moderate according to APSB22-01. Successful exploitation could lead to arbitrary code execution, memory leaks, denial of service by applications, security bypass, and privilege escalation.  The release notes provide download addresses for the Windows and macOS installers, as well as notes on what (important) bugs have been fixed.

German blog reader Joachim contacted me by mail on 12/1/2022 complaining about an installation error.

Hello,
just turned on the computer and poof, Adobe Reader DC Vers, 2021.007.20099 comes around the corner with an update error.

Error 1646: "Uninstalling the update package is not supported." 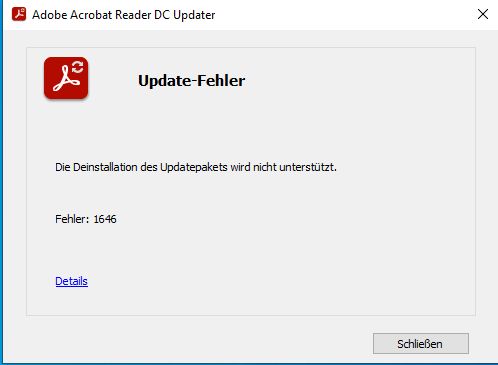 According to the error description, you should download an "Adobe Reader and Acrobat Cleaner Tool" and use it to delete all traces of previous installations of the program from your computer. After that, a new installation should be performed.

Is there any experience with the workaround or is the "update error" known?

This comment within my German blog post Twitter-Account wegen Berichterstattung zu Adobe-Problemen per DMCA gesperrt user Sascha has contacted us and complains about several open bugs. One is that their SCUP catalog for the 2020 Classic Reader only has the very first update (version 20.001.30002 from 9.2.21). The whole thing is addressed in this Adobe forum post – but there are no answers.

Another problem concerns 3D PDFs in Adobe Reader. Sascha has had problems with the performance of 3D PDFs in Reader for about 2 years at work. It doesn't matter if Adobe Reader 2015 or 2020 is used, and it doesn't matter if Classic or DC is used on newer hardware. There would be no problems with the paid version Acrobat – which has been tested on the same hardware. Sascha writes:

After a year (and that was pretty much exactly a year ago, too) I managed to get someone to take a look at it through a little fine-tuning of Adobe Uservoice. But (of course only because of Corona) they don't manage to patch away the problem, i.e. if we want to have normal performance on these devices (on old hardware 3D PDFs in Reader work without problems), then we have to buy licenses – a rogue who thinks evil of this

This has been reported in the Adobe forum, but the thread is dead as well.