[German]Microsoft is once again experimenting a lot with the online requirement for upcoming Windows versions. The cat was let out of the bag in the Insider Preview of Windows 11: An Internet connection is mandatory for installation in the OOBE phase. And only Microsoft accounts are then provided for setting up user accounts. By the way, this refers to the Windows 11 Pro variants. This means that scenarios that have been feared time and again are slowly becoming reality.

Forced online conncetion ahead on the road

I  had reported the day before yesterday in the post Windows 11 Insider Preview Build 22557 brings Start Menu Folders about some "innovations" in the latest Windows 11 Insider Preview build 22557. But I hadn't dug through the "forest of other innovations" announced by Langowski and LeBlanc in that post on the Windows Blog. So I came across the information in several places today (like on Twitter or in this comment), what I missed. 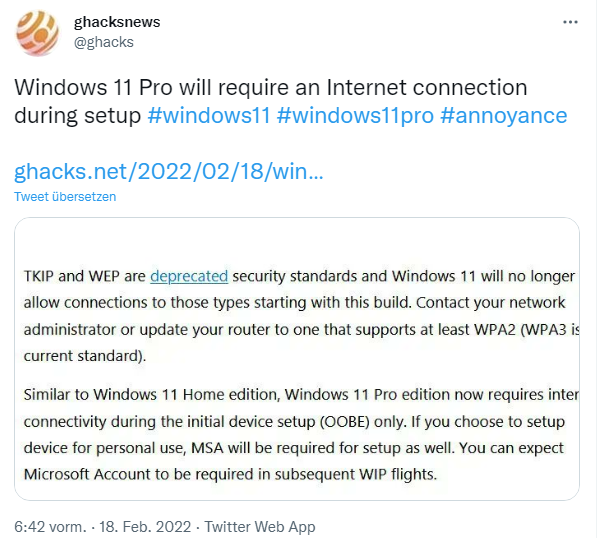 The relevant passage can be found on the Windows Blog in this post by Langowski and LeBlanc, who write the following in the original text:

Similar to Windows 11 Home edition, Windows 11 Pro edition now requires internet connectivity during the initial device setup (OOBE) only. If you choose to setup device for personal use, MSA will be required for setup as well. You can expect Microsoft Account to be required in subsequent WIP flights.

This requirement for an Internet connection during the OOBE phase, i.e. while Windows 11 is being set up, is new as far as I know. Where it definitely becomes apparent where Microsoft is going, however, is the indication that a Microsoft account will be required when setting up the devices for a user (titled personal use – that is, outside of a managed corporate environment with Windows 11 Enterprise). That should continue to be the case for future Insider builds.

We have had this joke before

The above approach in the Windows 11 preview is a clear indication of where Microsoft wants to educate and lead users. It won't stop hardcore fans from praising it all to the skies. Will this bright enthusiasm last when Redmond suddenly blocks this Microsoft account?

There are also likely to be some problems in the field when this clientele gets into areas with poor or no Internet connection. There are always computers that somehow don't find the network drivers for the WLAN chip when they are set up – then "it's over".

So it's no problem at all for hardcore fans and once again a storm in a teacup. With regard to the whole approach outlined above, I can only think of my blog post Dymo equips paper rolls for thermal direct printers with RFID chips for identification. The manufacturers always tries to nag or annoy customers and will only learn if people really vote with their feet.