On Windows 11 Professional or Enterprise, an administrator can use the Group Policy Management Editor to perform administrative tasks there. In the Computer Configuration -> Preferences -> Control Panel Settings branch (or the German equivalents), users and groups can be managed, services can be viewed, and much more. The Control Panel functions are available there (see the following screenshot).

German blog reader Markus K. contacted me last week by mail and pointed out a problem related to the Group Policy Management Editor in Windows 11 22H2 (thanks for that). He wrote:

because it's just annoying and I don't have a solution for it yet.

Windows 11 22H2 and simply want to create a scheduled task, for example.

I think Microsoft has something to fix.

When trying to create a scheduled task under Windows 11 22H2 in the Group Policy Management Editor (access to Scheduled Tasks) in the screenshot above, the tool throws a script error "An error has occurred in the script on this page", referring to the file:

and the ressoure IDR_POLICY_ViEW.htm embedded there. The following screenshot by Markus shows the details – an invalid character in line 292 of the called script is reported. 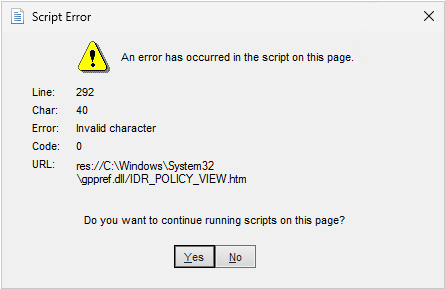 The task in question cannot then be set or changed, because the Group Policy Preferences (GPP) cannot be accessed. Markus then specified the problem in an addendum:

This is not only the case for Tasks, but even for all Preferences.

In an addendum Markus writes that all builds of Windows 11 are affected, even if he tests with version 22H2 in his environment (confirmed below).

Another report of the bug

On request Markus sent me a link to the Spiceworks forum – I found it with the appropriate search terms in the meantime. In the thread Error is GPMC when trying to edit registry vrom November 15, 2022 an administrator describes the error in the Group Policy Management Console (GPMC) under the categor Active Directory/GPO.

Getting "an error has occurred in the script on this page" when trying to edit registry on GPMC. Anyone got any ideas?

There the same error dialog as Markus K. is shown as a screenshot. Here the error text:

Script Error
An error has occurred in the script on this page.
Line: 292
Char: 40
Error: Invalid character
Code: 0
URL: res://C:\WINDOWS\System32\gppref.dll/IDR_POLICY_VIEW.htm
Do you want to continue running scripts on this page?
Yes No

Someone extracted the HTML resource with the script from the DLL and then posted it on pastebin. The code line 292 extracted in the Spiceworks head looks like this:

There is probably an erroneous character found by the script interpreter. Ad-hoc, I can't tell if the parameter of getElementById is enclosed with incorrect quotes (I suspect it is, but I am wary if the corruption isn't coming from the spiceworks software), or if there is otherwise an erroneous character there. There thread also describes that the bug is included in Windows 11 21H2 as well.

Anyway, it is a bug in the resource that can only be fixed by Microsoft. So far I don't know if this bug has already been reported to Microsoft (there is a mention within the spiceworks forum). I got yesterday also a feedback, that a German user was facing this error trying to change energy settings. Anyone else from the readership who has stumbled across the bug?