[German]On November 14, 2017 Microsoft ‘celebrated’ Patchday and released a bunch of updates. Some seems to be ‘problem bears’, the Malicious Software Removal Tool (MSRT) for instance. Here is an overview, what I’ve seen so far.

Update KB890830, released November 14, 2017 has some flaws. I received this German comment, where a user reported error code 0x8024001e. Also here are further comments with issues. Error 0x8024001E stands for WU_E_SERVICE_STOP (Operation did not complete because the service or system was being shut down). In normal cases I would blame third party antivirus products. But it seems, that Microsoft failed again with update KB890830.

Also here is a comment – reporting that MSRT install hangs for an hour at 0 %. Another user reported, that MSRT detected 29337 folders with malicious content. And here a user found in update history, that KB890830 hasn’t been installed. 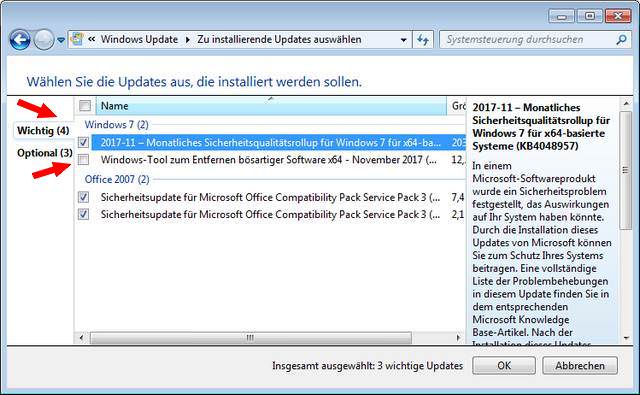 I recognized, that MSRT has been offered in Windows 7 Update als Important, but the checkbox was unchecked. Some reader told me, that the checkbox was previously checked, but changed to unchecked during the day. Did MS become aware of issues?

I assume that a wrong code branch was used to build the update, which now causes the trouble. My advice: Hides KB890830 in the updates. Under Windows 10 you can download the instructions from the blog post How to block Windows 10 updates.

Within this thread a user reported, that several of his Windows 10 systems hangs during first reboot. He received error 0x8024a11a and was forced to manually restart the machines again.

This list doesn’t cover this error code, but the group this code belongs to, indicates an AU error. Maybe a driver is causing this issue. A clean boot (see here) could solve this issue (see also my blog post Windows 10: Update error 0x8024a112).

HP 3D Drive Guard software is installed on many HP systems. The Drive Guard protects the hard disk of the computer (only applies to notebooks). This monitors the acceleration of the device for values, which can be dangerous for the hard disks, and move the hard disk heads into a parked position, if necessary.

According to Michael update KB4048955 for Windows 10 Version 1709 is causing trouble with HP’s 3D Guard. This is a frequently issue – see Fix for HP’s 3D Drive Guard-Bug after Microsoft Patchday, Till yet, no fix is available.

I stumbled uppon this forum thread reporting also another issue:

I have also experienced this issue when changing data connections after installing the November update. I copied the error and it is very ambiguous

It broke every visual in the desktop file. Interestingly enough, when I published the file with the broken visuals to the service it worked perfectly in the service. I then saved the broken file and reopened it and my visuals started working again.

And here is a comment, reporting, that November patchday is causing trouble on Windows Server 2016, which drops an update error 0x800705b4.

Just an addendum – thx to a German blog reader: At tenforums.com is a thread with title Dot Matrix Printer Stopped Working After Update. A user wrote:

And bunch of other Microsoft Office update. But I think one of these update is the main culprit of my problem.
Today, my dot matrix printer Epson LX-310 can’t print any work document. Switching to other non dot-matrix printer will print without any problem. Tried with POS printer and inkjet printer.

I tried with my other work computer which got updated too, and this problem persists. First I think my LX-310 is faulty, but after testing with my Epson LX-300, same problem happened. When I tried with a laptop runs Win10 that didn’t upgraded yet, it prints without any problem.
The document will sit in queue, and then dissappear, indicating that it has finished printing. But printer doesn’t move. Connection using USB. My PC didn’t have print port.

The initial post deals with Windows 10, but also other Windows versions are affected. Within the thread linked above, other user reported, that they are affected with more than 40 systems and are unable to print invoices. One user blame update KB4048953 for this issue, after uninstalling, the printer works again.

At Technet is this forum thread, where the issue has been reported for Windows Server 2012 R2 and an EPSON LQ690 printer. There update KB4048957 is blamed for the issue. Overall I found the following updates causing this issue so far: