That's what I call a déjà vu: Almost exactly one year ago, on September 19, 2016, I had published the blog post HP printer firmware disables refill ink cartridges. After a shitstorm HP and provided a correction firmware for the devices, allowing non HP ink cartridges from third-party suppliers to be used again.

This firmware update has been confirmed by more than 50 customers. Also other third party cartridge vendors confirmed that. Our phones doesn't stop ringing since yesterday morning.

Addendum: I don't know, whether the firmware update was new or wether it's just a re-release. What the vendor observed: Some HP printers are receiving a firmware update, and suddenly they are refusing to accept third party ink cartriges. According to German vendor superpatronen.de (German) the following HP printer models are affected:

„One or more cartridges appear to be damaged. Remove them and replace with new cartridges." 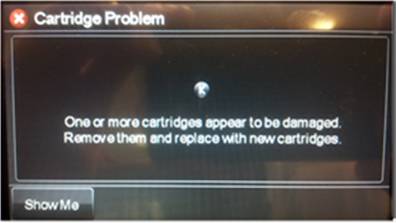 The US HP support page addresses the issue. HP's new firmware update seems to force HP's Dynamic Security Feature to block non HP cartridges. A description of this feature may be found here. But there is a fix.

I've been contacted by someone, who claimed, that HP denies that a new firmware has been enrolled. I can' prove that – but the observation from superpatronen.de, that third party ink cartridges are refused at Sept. 13, 2017, are real.

There is also an article here, saying, that HP denies that a new firmware update has been shipped. There are two scenarios that could be happens: Somehow an old firmware update has been released unintially again – or within an existing firmware Sept. 13 triggers again HP's Dynamic Security Feature to block non HP cartridges. The third scenario, that superpatronen.de is simply wrong seems not too reliable – due to 50 affected customers. If I find out more details, I will add the information here.

Addendum: There is now an article at ibtimes.co.uk, citing my blog post and also mentions user posts in HP's forums. So I searched the Web and came across this post from 09-15-2017. A user claims, that his Office jet pro 8500A refuses third party ink cartridges. An HP Expert says 'The Officejet 8500 never had the issue with 3rd party ink.'. The user bought some original HP ink cartriges and the printer works. Now the customer has the difficulty, to tell the printer, that he has never been affected by third party ink cartriges ;-).