[German]The upgrade to Windows 10 April Update (version 1803) is probably not running really smooth. Especially some users of Microsoft's Surface Studio are pissed, because the mouse causes trouble after the upgrade.

What is Surface Studio?

The Surface Studio was introduced by Microsoft in October 2016 and is a high-end tablet for designers. It has a very thin 28 inch 4.5K LCD monitor (13.5 million pixels) with touch function and comes with an Nvidia GeForce 980M GPU, an Intel Core i7 processor and 32 GByte RAM. 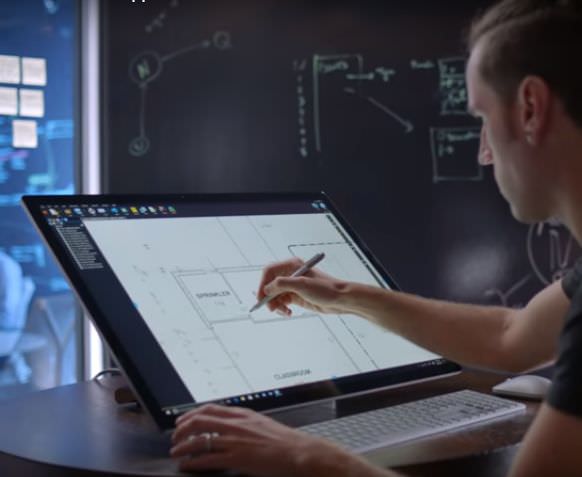 A nice device, where the monitor can be moved from desktop mode via a special "Zero Gravity" hinge into the so-called studio mode. Then the screen is arranged at a 20 degree angle like a drawing board, making it ideal for digital drawing and design. The devices had a price between 3,000 and 4,500 US $.

Owners of this device has been updated automatically to Windows 10 April Update in the past weeks. Unfortunately Windows 10 version 1803 is causing issues on Surface Studio and other Surface models. Within my blog post Windows 10 V1803: Rollout stopped for Intel SSDs I reported issues with SSDs from Intel and Toshiba on Windows 10 Version 1803. The Surface Pro (2017) was also affected, whose owners complained freezes. The reason was the Intel SSD6 built into the tablets, as Woody Leonhard writes at Computerworld.

But also at Surface Studio users has been affected, as the Computerworld article mentioned. A Surface Studio owner reported at the Microsoft Answers forum with the problem that the mouse is constantly losing connection:

Has anyone else experienced the mouse keep disconnecting on their Surface Studio since the April 2018 update?

It's so annoying. If I touch the screen when it happens a few seconds later it comes back.

Does Microsoft not test their premium devices with new updates or something?!

Other Surface Studio owners confirmed this issue within this thread. The question arises whether Microsoft is testing its own hardware with new versions of Windows 10. Within the forum thread, an answer of a Microsoft agent (paid forum moderators) is marked as the solution:

Yes I'm experiencing the same problem. I have also noticed that when the mouse stops working, the keyboard also stops working, but like you stated, if you touch the screen, the mouse and keyboard start working again. I never seen this before updating to the April 2018 update.

Mod Edit: We are currently working on a solution that will be provided in a future Windows Update. Please continue to check for Surface and Windows Updates to ensure your device has the most current firmware and software available.

Marking as "Answered" to raise visibility for now. We will update this response once the fix has been published.

Bluetooth is to blame

Somewhere (I have forget the source) I read that Microsoft has redesigned the complete Bluetooth stack for Windows 10 V1803. Within the MS answers forum thread, a user pointed out the root cause.

What I discovered is that it appears the Bluetooth connection is going to sleep until you either unplug and replug a USB device or touch the screen.  Once that is done, my keyboard and mouse would work again for about a half an hour.

As a workaround, the user suggests opening the Device Manager, double-clicking the Marvell AVASTAR Bluetooth Radio Adapter to open the properties tab. On the Power Saving tab, disable the option that allows the computer to turn off the device. The workaround seems to work for several people.