[German]One should think that owners of a Microsoft Surface Book 2 can easily upgrade to the Windows 10 May 2019 Update (Version 1903). After all, Microsoft should know its hardware in detail. But there are worse issues with the upgrade to Windows 10 Version 1903, and Microsoft has completely stopped the rollout of version V1903 for these devices now.

Windows 10 May 2019 Update (Version 1903) is already available for some days as a feature update for corresponding devices. Consumer devices with older Windows 10 versions up to V1803 received a forced upgrade (see Windows 10 V1803: Force update to V1903 – Part 1). There are some Upgrade-Stoppers (see News from Windows 10 V1903: Images, Rollout, Show-Stopper), but the feature update to the Windows 10 May 2019 Update (Version 1903) should normally be offered on devices with compatible hardware.  And I would have expected that Microsoft’s own Surface models are ready for this upgrade, especially the expensive and current Surface Book 2.

Models with NVIDIA GeForce GTX 1060 are affected, causing the graphics processor on the additional card to randomly be disabled, which affects the graphics performance of Surface Book 2. The thread here at reddit.com describes the issue.

Evere since I updated windows to 1903 and got new firmware I have been having a lot of problems that I hope you can help me solve:

1- I am getting BSODs regarding VIDEO_TDR_FAILURE and nvlddmkm.sys. I reverted the nvidia drivers this morning and I haven’t got a BSOD yet but it’s only been a few hours.

2- My GPU disconnects randomly. I am using the pc attached to the base and I hear the USB disconnect sound and I no longer see the 1060 gpu. At the same time I notice that my wacom tablet acts as if I just plugged it.

Between the freezes and the disconnects I am driving myself crazy. I already lost hours of work because of one BSOD (BSOD showed up as I was saving a file and corrupted it). can someone help? Is there a way to not only go back to 1809 but to also go back to the previous Surface drivers? Thanks!

The Surface Book 2 throws BlueScreens since the upgrade to Windows 10 version 1903, or the GPU is separated, so that only the internal graphics chip is used for the output. Other users confirm this effect on their devices. On reddit.com there’s also this thread, where a user gives vent to his anger and asks people to support this entry on Microsoft’s Feedback Hub via Upvote.

Within the thread other users confirm that there are issues with the Surface Book 2 and the Windows 10 May 2019 update. A user writes that he has conferred with a Microsoft employee about the GPU problems. They advised him to go back to Windows 10 version 1809.

Windows Lastest mentioned a reddit.com thread, where a user reports that his Surface Book 2 has been blocked for a feature update to Windows 10 version 1903 due to compatibility issues. He had pointed out the GPU problems in this reddit.com thread. The following screenshot shows an excerpt from the feedback hub while searching for the Nvidia GeForce GTX 1060 graphics card. 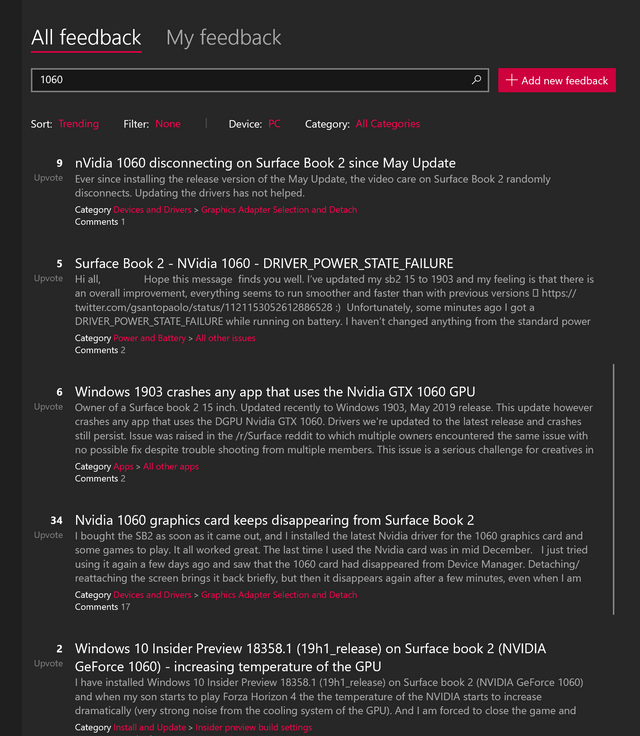 Now the affected user receives the information that the May 2019 update is blocked for installation.

I had pointed out this fact in the blog post Windows 10 V1803: Force update to V1903 – Part 1 in another context. A Microsoft employee with the alias Zac has said in a Reddit discussion that the problem is possibly related to the graphic drivers. He wrote, “I’m not sure on the timeline, I think the problem is the video drivers, and it may take time for fixed driver versions to arrive”.

This entry was posted in devices, issue and tagged issues, Surface, Windows 10 V1903. Bookmark the permalink.

6 Responses to Surfaces Book 2: Issues with Windows 10 V1903 and Nvidia