[German]The recently released Windows 10 May 2020 Update (version 2004) contains many bugs. Administrators in enterprise environments that rely on storage spaces should wait with the upgrade. There are issues with storage spaces. I've put together a few things for your information.

What is Storage Spaces?

Storage Spaces is a technology introduced by Microsoft for Windows clients and Windows servers to protect data from drive errors. The technology is conceptually similar to RAID, but is implemented by software. Users can use storage space to group two or more drives into a storage pool and then use the capacity from that pool to create storage. Multitier caching of HDDs (if necessary of different manufacturers / speeds) by means of SSDs is also possible. These usually store additional copies of the data. If a drive from this group fails, Windows can still access an intact copy of the data.

When the capacity of a storage space is exhausted, administrators can simply add more drives to the storage pool. Microsoft has described this in this document for Windows Server. And the Wikipedia provides a description of the function for Windows 8 here..

One issue that has been bothering administrators for months is the 0x00000057 error when creating new storage space storage pools. On Microsoft Answers you can find this thread from September 2019, which deals with the Storage Spaces Error 0x00000057. There are also several entries in the Microsoft Feedback Hub (see for example aka.ms/AA7jko4). 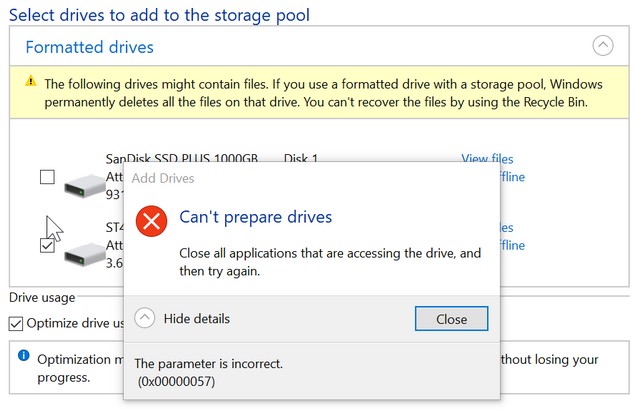 Users will not be able to create new storage spaces pool or volumes. The post referred to a Windows 10 Insider Preview Build 18951.1 (the development branch that culminated in Windows 10 version 2004). Jason from Microsoft has also talked to the responsible developers – but when browsing through the 3 pages, little came up. A moderator, Don Culbert, responded with a post naming PowerShell commands that could be used to create the required operation. There was no real resolution. Now I read at Windows Latest,  that the Storage Spaces Error 0x00000057 is still an issue – the management interface is probably pretty broken.

Probable reason: Powershell does not know the new version level for pools. In Powershell only the creation of a pool in Version-Level Server 2019 is possible. The upgrade of the Pool Function Level can / must be done subsequently. It looks like I'm trying to create the GUI pools on the new level. This is a speculation why it still only works via Powershell, but not via GUI. German blog reader Karl mentioned it in this tweet. This was first reported in the Feedback Hub 8 months ago.

On reddit.com there is this post, where a user points out another problem. In Windows 10 version 2004, there are probably memory errors with storage spaces:

Do not upgrade to 2004 if you're using parity storage spaces.

Ever since updating to 2004 I have been experiencing severe corruption & chkdsk errors on my parity drives (and only parity) in storage spaces. (See any of my recent post history) I managed to reproduce the corruption on a new pool, with a new set of disks, with a new set of SATA controllers, but I've been assuming I must have some other kind of hardware failure instead.

In this Reddit post, the affected person received confirmation that another user had the same experience after upgrading to Windows 10 version 2004. MSPU has collected a lot more here.

And there is another hammer with storage spaces, that affects all Windows 10 builds down to version 1903. I've had this topic on my agenda since spring, but I haven't gotten around to editing it here on the blog yet. If files are deleted in a storage space storage pool, this should cause the occupied storage to shrink again. Karl noticed that the volume formatted on a ReFS with mirroring (Mirror aka RAID 1) is not the case. He already mentioned the whole thing on Twitter in January 2020.

I think I have found something critical in #20H1, sorry.
Storage Spaces will not free up space (thin prov).
Drives are reportingly full even if I delete GB of data from @windowsserver might also affect 20H1 Srv SAC@JenMsft @NorthFaceHiker
details: https://t.co/3pgXR9yloj

The tweet has a lot of follow up tweets where more information came. He suspected the RefFS filesystem, but then he found this technet forum thread and commented there. In his case, the effect affected Windows 10 Professional – an insider preview in the 20H1 development branch, which is now available as Windows 10 Version 2004.

This behavior also applies to Windows 1903 or later SAC Core Servers. If I haven't missed anything: As soon as a configured storage pool is reported as full, no more free storage can be created by deleting it. This affects pools with RefFS file system, for NTFS volumes the return of the storage pool works. Karl wrote me that the Windows 10 version 1909 with RefFS (without storage spaces) supports the return of free storage areas. It concludes that there is a bug in storage spaces that occurs in conjunction with RefFS. 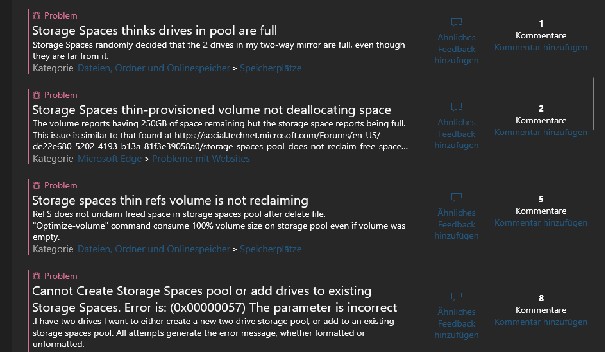 The execution of defrag optimization (slab consolidation) makes the situation worse.
The process zeroes unused memory areas and thus releases them again. Data is then "written" and fills the pool and the drives, but on the ReFS volumes it is not released again as usual.

Karl told me: All issues were professionally analyzed in Insider Fast versions of client and server with the Insider Team / Storage Team and completely fixed for the first time in version 19628. However, there is no backport of these fixes to the Windows 10 2004, 1909 and 1903 versions yet.

Defrag: In this context, it also led to various display issues with the Defrag tool, where always different values appeared during several optimization attempts.

Another error in Storage Spaces

Microsoft has confirmed another bug in this support document. In Windows 10 Version 2004 Storage Spaces partitions may show as RAW after an upgrade.