[German]New problem with the tool CCleaner Version 5.69. The program deletes files of Firefox 79 extensions, in which data or settings are stored, when cleaning. Here are a few details about this free software for Windows and a workaround.

I had already seen it, and German blog reader Gerold left a comment about this problem in the blog (thanks).

The problem was already reported to the developers in July, when Firefox 79 was still in beta status.

The people from Techdows noticed this and they published a post about the problem.

Mozilla's developers have implemented a synchronization of extension settings in Firefox from version 79 on via a user account. Whoever logs on to his Firefox account will have the extensions and other data synchronized with all devices. This concerns "items that store extensions in this area (Storage.sync)".

When an extension tries to access storage sync data in Firefox for the first time, the extension data stored in profiles is automatically migrated and the data is stored locally in the new file "storage-sync2.sqlite" in the profile directory. The following screenshot shows the three new files. 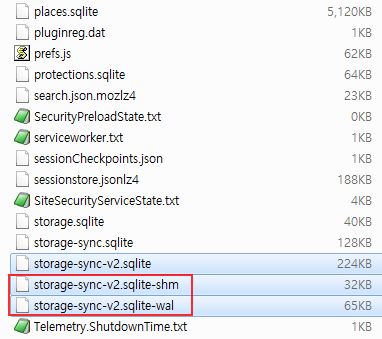 The CCleaner problem with Firefox 79

Techdows writes in this article, that the CCleaner cleans the Firefox internet cache by default. When cleaning in the background, the CCleaner erroneously removes exactly these setting data of the Firefox extensions, what breaks some things.

However, the user can explicitly exclude this cleanup of Firefox files in the CCleaner user interface on the Applications tab. Techdows describes in more detail how to exclude the files from the cleanup.

This problem was already reported to Piriform, the developers of CCleaner, in this forum post in July 2020 while Firefox was still in beta testing. The change is not yet reflected in the CCleaner (up to version 5.69.) It is again a proof to keep your hands off such tools.

Remarks about the CCleaner

Cleaner is a free tool for cleaning up Windows – Wikipedia writes here about 'optimization'. Some hints on what is 'cleaned and optimized' can be found under Askvg. I don't like this part (I've met too many people in forums who have used it to clean their systems to the breaking point) and see CCleaner more as a kind of snake oil (not really necessary, but the tool is very popular among users).

This entry was posted in issue, Software, Windows and tagged Bug, CCleaner. Bookmark the permalink.