[German]Another small addendum from the August 2021 patchday regarding the PrintNightmare print spooler service vulnerability. Microsoft did release a patch that is supposed to fix the vulnerability. But I had already pointed out in my Patchday blog posts that this patch was not sufficient. Now Microsoft has set a new CVE-2021-36958 (Windows Print Spooler Remote Code Execution Vulnerability) as of 8/11/2021.

A vulnerability in the Windows Print Spooler service has been known since July 2021, allowing remote code execution (RCE) and possibly privilege escalation. Microsoft has been trying to fix this vulnerability, now named PrintNightmare, through updates since the beginning of July 2021 (see the list of links at the end of the article). But after each patch, security researchers prove that the PrintNightmare vulnerability was incompletely patched. In particular, the function called Point-and-Print, which allows users to install printer drivers, can be abused for attacks.

As of August 10, 2021, Microsoft has released several security updates for the still-supported versions of Windows, including the following fix:

As of August 10, 2021, there was also the MSRT blog post Point and Print Default Behavior Change on the topic as well as a support post KB5005652 on Point-and-Print, with help for administrators. However, I had already pointed out in the blog posts linked below that the point-and-print vulnerability is probably not fully patched.

Because security researcher Benjamin Delpy already pointed out in the following tweet that he can run his exploit in a virtual machine with a patched Windows 365 installation with standard user rights. 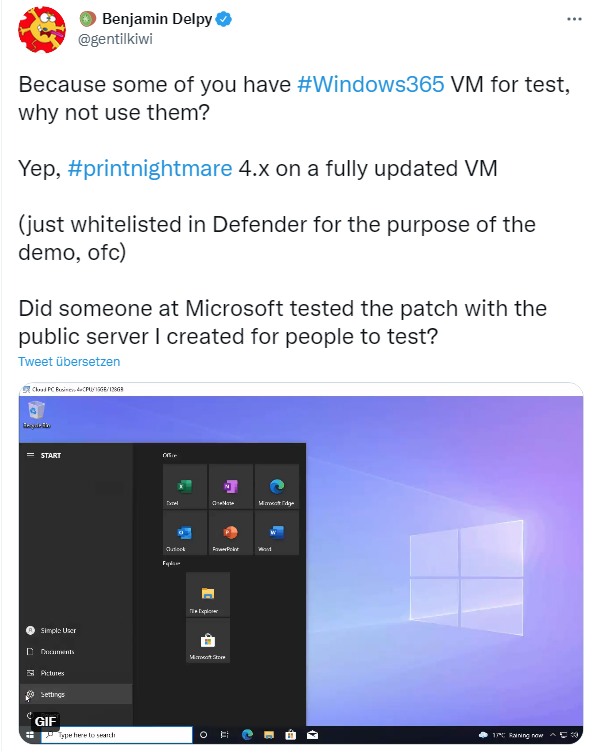 Files are then reloaded from his public network printer. The only action he had to take was to disable Defender (which can detect an attack via this vulnerability). 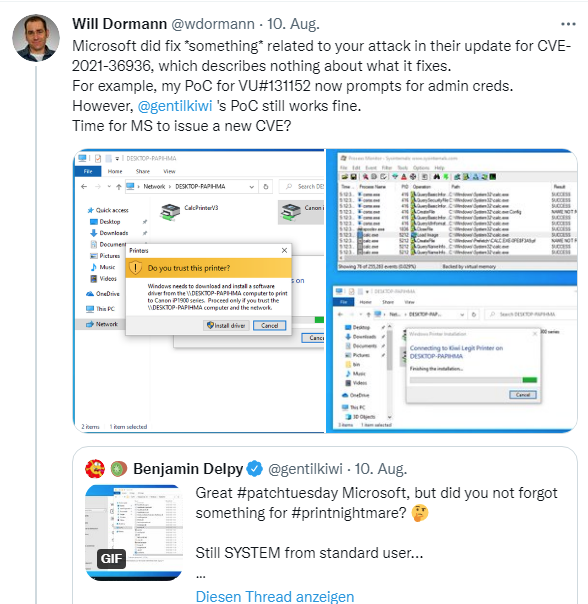 Security researcher Will Dormann writes in the above Tweet, that he now requires administrator privileges for his proof-of-concept (PoC) for the CVE-2021-36936 vulnerability. He then references the tweet from Delpy, who was able to gain SYSTEM privileges from a standard account.

German blog reader Jonas describes in a comment to my German blog post that installing new drivers or to update a printer driver requires administrator privileges.

By default, users without administrator privileges will not be able to perform the following point-and-print steps:

The source cited is support article KB5005652 on point-and-print. This leads to a discussion here on the blog, where blog readers like Zanza report their own experiences. He writes that he could connect to new printers from the print server even if the affected driver already exists locally. On Twitter I read a message that files would be reloaded from the remote print server if necessary. I can't test anything here, but overall it's probably a pretty unsatisfactory situation.

Kevin Beaumont has published the simple SystemNightmare.bat on GitHub to give you instant SYSTEM command prompt on all supported and legacy versions of Windows. 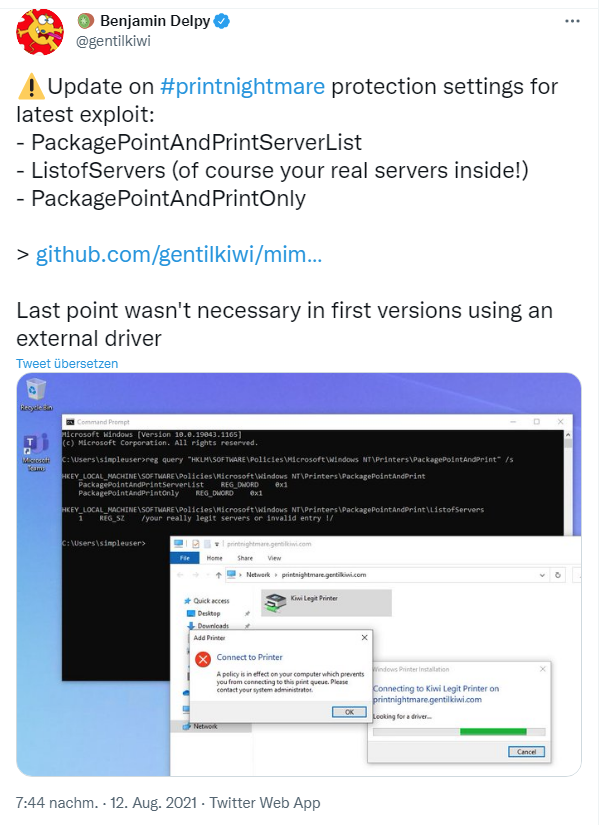 Benjamin Deply has linked his GitHub page within the above tweet. There he gives advice on how to mitigate this attack vector through registry entries, etc.

Will Dormann's tweeted that Microsoft has published a new CVE-2021-36958 (Windows Print Spooler Remote Code Execution Vulnerability) as of August 11, 2021. It states:

The workaround for this vulnerability is stopping and disabling the Print Spooler service.

Currently, the vulnerability is not exploited yet. Microsoft has once again dug out the old workaround, and recommends stopping and disabling the print spooler service. So PrintNightmare is not over yet – and the animated GIF shown in this tweet sums up Microsoft's patch attempts.