[German]Microsoft promised, with Windows 11 everything will be better, more beautiful and faster – at least if you believe Microsoft's marketing. The only thing that is a bit stupid is that the developers in Redmond are using old Windows 10 code with a few optical changes. So they are really building old Windows 10 bugs into this new great Windows 11. A German blog reader pointed out to me that Windows 11 also floods folders with empty TMP directory garbage (a bug still existing since months in Windows 10).

In July 2021, German blog reader Thomas G. had informed me about a strange observation in Windows 10 version 21H1. Both Home and Pro tend to flood the System Profile folder with empty Temp directory entries. The entries may be found in the folder:

The screenshot below shows the collection of .tmp folders.

The problem has been known from Windows 10 for quite some time, as the screenshot above shows entries with dates from March 2020 (I found that in a tensforum post). I had reported extensively about this issue in Windows 10 in the blog post Windows 10: Flooded with empty TMP directory garbage. Many blog readers have confirmed this issue. There is also the explanation that the empty TMP folders can be deleted and are probably created by the Windows program ProvTool.exe (Provisioning package runtime processing tool).

Windows 11 also has the problem

This week German blog reader Lutz S. contacted me on Facebook in a private message. Lutz is currently dealing more intensively with Windows 11. The background is that the CIT of his employer is currently planning to start the deployment of Windows 11 in the first half of 2022. As an administrator, Lutz wants to be prepare a bit for the problems, reported from his current 380 users. He has therefore set up a test client with Windows 11 on a DELL Vostro 3750 from 2011. Lutz writes about this:

Even if the computer is actually not Win11-compatible, changes in the registry make it (currently) still possible to install Windows 11. To my astonishment, WIN 11 runs faster on the device than the predecessor, hardware was detected without errors. The device also gets updates.

However, a "side effect" known from WIN 10 came under my eyes, which you had blogged about WIN 10 some time ago. It is about the empty folders that Windows creates in the system32 directory en masse. I could experience the same behavior now with the fresh WIN 11 installation. In my case there were 80 TMP folders after the OS installation.

Until today it is not clear to me, for what purpose they are actually created there. Maybe that is worth you sometime ne info in your blog.

I booted an old test installation of Windows 11 in a virtual machine and checked. In fact there were already 60 of these folders in the mentioned directory in my test installation – even though the test machine has only been running for a few minutes. 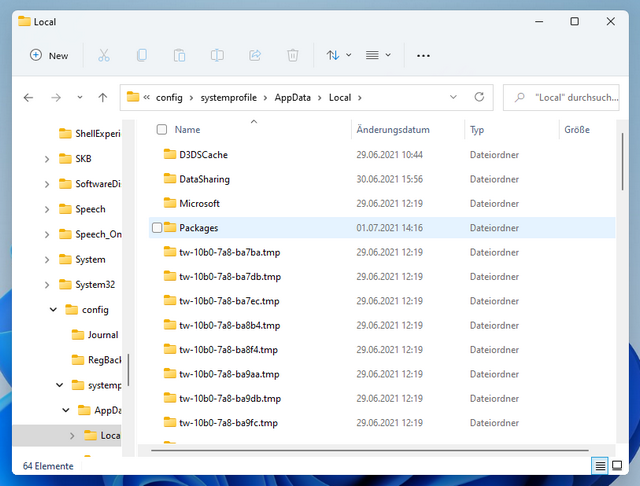