[German]It's November 2021, time to take a look at the state of affairs regarding the distribution of feature updates. Microsoft started updating more compatible Windows 10 machines to Windows 11 a few days ago. Further, Windows 10 21H1 is now being released to all compatible machines – and Windows 10 21H2 should be close to release. Here's a brief overview. 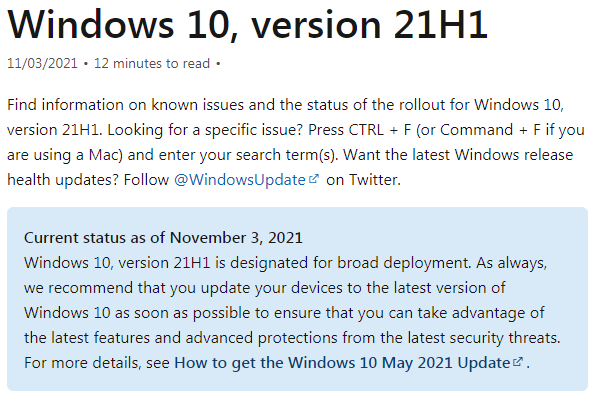 That's according to an announcement in the Windows 10 status area. With a date of November 3, 2021, it says there that Windows 10 version 21H1 is intended for broad distribution. Microsoft recommends updating devices to the latest version of Windows 10 as soon as possible. This is the only way to ensure that the latest features and security updates are delivered.

The feature update will be unlocked by an enablement update for machines running Windows 10 version 2004 and later, as the relevant data has already been distributed via Windows Update. I had explained details about this in the blog post Windows 10 May 2021 Update (21H1) released (May 18, 2021)).

Back on October 27, 2021, Microsoft announced on its Release Health status page that Windows 11 availability has been increased. Microsoft plans to use the latest machine learning model to offer the Windows 11 upgrade to a wider range of eligible devices. These must be Windows 10 machines that meet the minimum requirements for Windows 11 (see Windows 11: Hardware requirements).

Microsoft recommends that those users upgrade their devices to Windows 11. The promise is that this clientele will be able to take advantage of the latest features and enhanced protection against security threats. Is pretty blah-blah, as Windows 11 is nothing more than a buggy Windows 10 with some visual changes (gimmicks).

Microsoft plans to continue training its machine learning model during the phased rollout to ensure a smooth upgrade. They will also provide status updates as Windows 11 availability continues to increase over time.

I assume that Windows 10 November 2021 Update (version 21H2) will be rolled out to machines running Windows 10 version 2004 and above in the coming hours (November 5, 2021) or days. The colleagues from deskmodder.de write here that the ISOs with the final installation images for Windows 10 version 21H2 are already on Microsoft's servers.  The new features are limited – some information can be found at MSPU.

The feature update will also be unlocked on machines running Windows 10 version 2004 and later via an enablement update provided by Windows Update, as the relevant data has already been distributed via Windows Update. I had explained details about this in the blog post Windows 10 May 2021 Update (21H1) released (May 18, 2021)).

Windows 10 version 2004 will also receive updates for the Home and Pro variants for the last time on December 14, 2021. These will then drop out of support, as you can read on this Microsoft page.