[German]A small addendum for people who already use Windows 11 and are surprised that individual apps suddenly no longer work. Windows 11 is still extremely new, it was only released on October 5, 2021. But on October 31, 2021, a certificate used to digitally sign apps expired. As a result, certain apps or applications included with Windows 11 will go on strike from November 1, 2021. This can happen and Microsoft has profound workarounds.

The issue has been on my agenda since the beginning of November and was also mentioned by German blog reader 1ST1 in this comment. Some Windows 11 build-in apps have a problem with the digital certificate they were signed with as of November 1, 2021. The certificate used expired on October 31, 2021. The apps or partial features can then no longer be executed. Microsoft has confirmed the problem as of November 3, 2021 in this support document for Windows 11 and says.

Starting on November 1, 2021, some users might be unable to open or use certain built-in Windows apps or parts of some built-in apps. This is caused by an issue with a Microsoft digital certificate, which expired October 31, 2021.

In Microsoft Answers, there is this thread dated November 1, 2021 that discusses the problem for the snipping tool included in Windows 11 for taking screenshots. Users receive the following error message at startup. 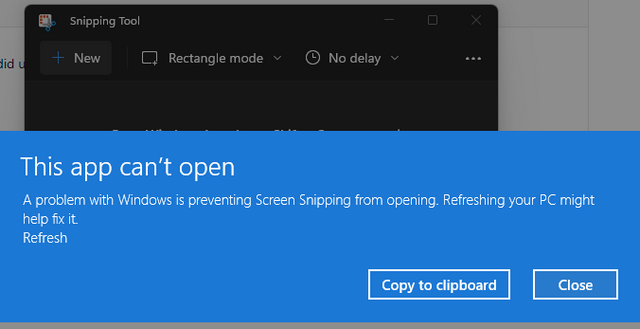 The message is not very meaningful and the suggestion to refresh the PC is simply nonsense – as long as the image rolls out the old certificates, the error will occur again. Moreover, the error has not been fixed for the snipping tool yet.

Both the Snipping tool and various settings pages in Windows 11 S-Mode continue to strike. Microsoft states that they are still working on a solution to fix the two striking tools. By the way, Microsoft has a cool workaround for the snipping tool: Simply don't use it, but take the screenshots with the PrnScr key of the keyboard (in combination with the Alt key, if necessary) in the clipboard and then paste them into an application. I've been using this for years.

Addendum: Microsoft is currently testing the update KB5008295. This is supposed to solve the problem of the apps not starting.

This entry was posted in issue, Windows and tagged App, issues, Windows 11. Bookmark the permalink.