[German]Currently, I warn about running unpatched Exchange vulnerabilities and ProxyShell attacks almost on a daily basis. A few days ago, Trend Micro issued a warning about attacks against ProxyShell vulnerabilities via the Squirrelwaffle exploit and the takeover of Exchange email mailboxes. As of a few hours ago, another exploit is public as a proof of concept, and exploitation against unpatched Exchange servers is likely. So patch the systems!

Cyber attackers have been using three known and named ProxyShell vulnerabilities in Microsoft's Exchange Server 2013, 2016 and 2019 for months, and updates have been available for them:

Microsoft fixed the vulnerabilities in April and May 2021, and also assigned corresponding CVEs in July 2021, as well as released security updates. Since that time, there have been numerous warnings (including here on the blog, see the list of links at the end of the article) that the vulnerabilities have been exploited. In November 2021, security researchers at vendor Mandiant came across approximately 30,000 Exchange servers accessible via the Internet that were unpatched and thus still vulnerable to these attacks. Meanwhile, there is a warning that the ProxyShell vulnerabilities are being abused via new attack variants (see ProxyNoShell: Mandiant warns of new attack methods on Exchange servers (Nov. 2021)).

Last Friday, Trend Micro (TM) published the article Squirrelwaffle Exploits ProxyShell and ProxyLogon to Hijack Email Chains on its blog. The article is about a new exploit for the ProyShell vulnerabilities in Exchange. In September, Squirrelwaffle emerged as a new loader to infect vulnerable Exchange servers via the vulnerabilities. The loader is spread via spam campaigns and is known to send its malicious emails as replies to pre-existing email chains. This is a tactic that lowers victims' protection against malicious activity (recipients trust known senders).

The TM security researchers believe that the attackers use a chain of ProxyLogon and ProxyShell exploits to accomplish these attacks. The background is that all of the attacks observed and then later investigated by Trend Micro in the Middle East were vulnerable to ProxyLogon and ProxyShell vulnerabilities via Exchange servers hacked via Squirrelwaffle. In their blog post, the security researchers shed more light on these initial access techniques and the early stages of the Squirrelwaffle campaigns – I don't need to go into the details. 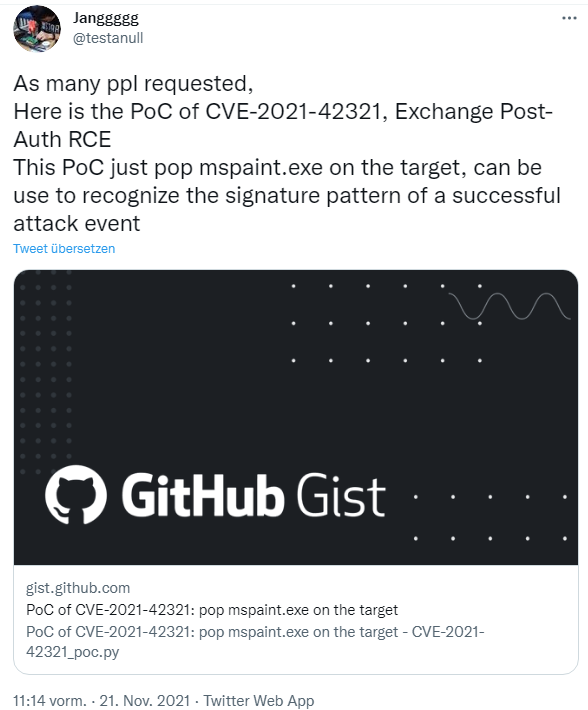 The exploit launches to demo MSPaint on the vulnerable systems running Exchange Server 2016 and 2019. The colleagues at Bleeping Computer published this article on that matter. Microsoft confirms that they are seeing a limited number of attacks via the vulnerabilities. So it's time to double-check your Exchange servers are patched. Can be done with the Exchange Server Health Checker script if necessary.

This entry was posted in Software, Update and tagged Exchange, Security, Update. Bookmark the permalink.