[German]Cyber attackers have been using three known vulnerabilities in Microsoft's Exchange Servers for months, for which updates have been available for months. Despite this, there are around 30,000 Microsoft Exchange Servers accessible via the Internet that are vulnerable to attack via these vulnerabilities. Security researchers have now issued a warning because cyber criminals have changed their tactics to attack systems and install hard-to-detect WebShells there by exploiting three vulnerabilities in on-premises Microsoft Exchange servers, grouped under the name ProxyShell.

ProxyShell  is a combination of three vulnerabilities in Microsoft Exchange Server:

The issue should have been in the clear in the meantime. But in November 2021, security researchers from the provider Mandiant came across around 30,000 Exchange servers that are accessible via the Internet, which are not patched and are therefore still vulnerable to these attacks. 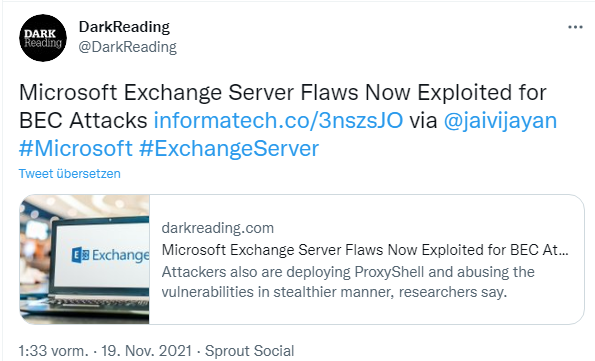 This may be a response by cyber criminals to the fact that antivirus and endpoint detection and response (EDR) vendors have been quick to develop detection capabilities for Web shells created via mailbox export. Mandiant's Joshua Goddard says that likely prompted the attackers to look for new ways to attack unpatched Exchange Server systems via the ProxyShell vulnerabilities.

Once a WebShell is successfully installed, the attackers can use remote PowerShell to create new mailboxes, assign them privileged access to other mailboxes, and then access them via Outlook Web Access (OWA). Mandiant has therefore decided to make these changes in tactics public. This is because the previously published detection and response instructions focused exclusively on web shells originating from the mailbox export.

The Mandiant blog post details the recent attack paths used to install WebShells and compromise Exchange mailboxes. Just a few days ago, in the blog post CERT-Federation, USA, GB warns about attacks on Exchange and Fortinet, I published a warning from the BSI about compromised Exchange servers being abused for email attacks. Mandiant's blog post provides guidance on how to both monitor and scan Exchange servers for successful compromise. Perhaps the advice will be helpful to Exchange administrators.