[German]Today I have a quick question for users and service providers who own or support Lenovo devices. I have seen reports that these devices (especially in the consumer sector) suddenly no longer boot after a Windows update (possibly January 2022 update). I don't have a lot of information yet – but I'll summarize what I've come across.

It was a short post on Facebook in a German group for IT professionals / network specialists / administrators that caught my attention. There, a service provider asked if there might be experiences regarding Lenovos that are broken after a Windows update. 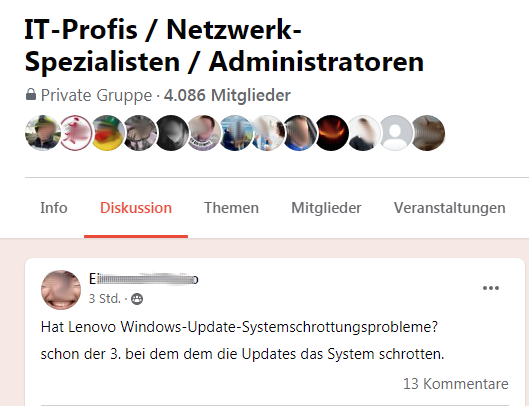 The poster is a service provider who gets his hands on many customer systems and can now look at three systems from Lenovo that are broken after installing a Windows update (probably in January 2022). I had offered to cover this within my blog if necessary, requesting for more details. When asked, the thread creator specified the situation as follows:

The systems are consumer devices, Ideapad and similar, which are striking. After a reboot that follows the updates – they go into an infinite loop and ends up in the Lenovo specially customized Recovery (from Microsoft) at keyboard selection.

Broken down a bit, these are consumer systems from Lenovo like IdeaPads with Windows 10. After a Windows update, the devices do not come up on reboot, but end up in an infinite loop that leads to the Lenovo recovery. It is a recovery of Windows specially customized by this Chinese manufacturer. Another user responded to my post and writes:

In other words, even there it looks like this person has already gotten four Lenovo laptops on the table with boot issues after a Windows update. In this case, the Windows updates can be thrown out in Windows Safe Mode so that the devices can boot again. However, the original poster writes:

I can't get there [in safe mode] at all. Only the recovery system [is available], but it does not find any recovery points.

Another user confirms the problem and writes:

I recently had 2 ThinkPads where I first had to update everything via Lenovo System Update and then the Windows updates ran cleanly.

This indicates that there are some problems at Lenovo, which can be fixed via Lenovo System Update. Only then can Windows Updates be installed successfully. The original poster meanwhile reports.

so one [of the affected computers] could be "rescued" via recovery point.

at the 2nd I have now BCD store is corrupt, after the recovery attempt with bcdboot

On Lenovo, there are a number of forum posts (some from 2020) under the term Infinity loop that address the issue. Also on reddit.com there is this post from December 2020 with a similar problem description. From AOMEI there is this article from Sept. 2021 that also deals with this issue.

Addendum: Got a private message on Facebook from a supporter, with the following text (translated).

Hello. Regarding Lenovo updates: I have had at least 15 Lenovo pc/laptop that did not boot after a BIOS update.

Just yesterday a Lenovo V330-15IKB 81AX crashed after a BIOS update (which was released in 6.2021) (via Lenovo System updater). Screen remains black.