[German]Users of a Microsoft Surface Pro 7 suffer from the problem that the devices simply switch off. Causes are unknown, and workarounds do not work for all users.

I got back to the topic, via a tweet from German site Golem, who covered this issue within a separate article.

The problem: The Microsoft Surface Pro 7 devices running Windows 10 simply switch off sporadically during operation for reasons incomprehensible to the users. This becomes clear in this Microsoft Answers forum thread. The first post is dated 20 December 2019.

If the device stays ideal for a minute it directly shuts down. I have checked all the sleep and power settings and that’s not an issue. I see this was an issue in previous versions too. Any fix?

Within a few days more users confirm the behaviour of the still new devices. The replacement of the devices by Microsoft support does not really seem to help. In a post a user explains that he has solved the problem for himself in this way:

My Surface Pro 7 issues are seems to be solved by adjusting sleep time and screen off time. No more shutdown and freezing of the screen.

MS support offered to replace but I don’t think this is hardware issue. Will replace if problem occurs again.

In the power settings, he has adjusted the waiting time until the screen goes dark and from when the device goes into sleep mode. The following screenshot from the forum shows the settings. 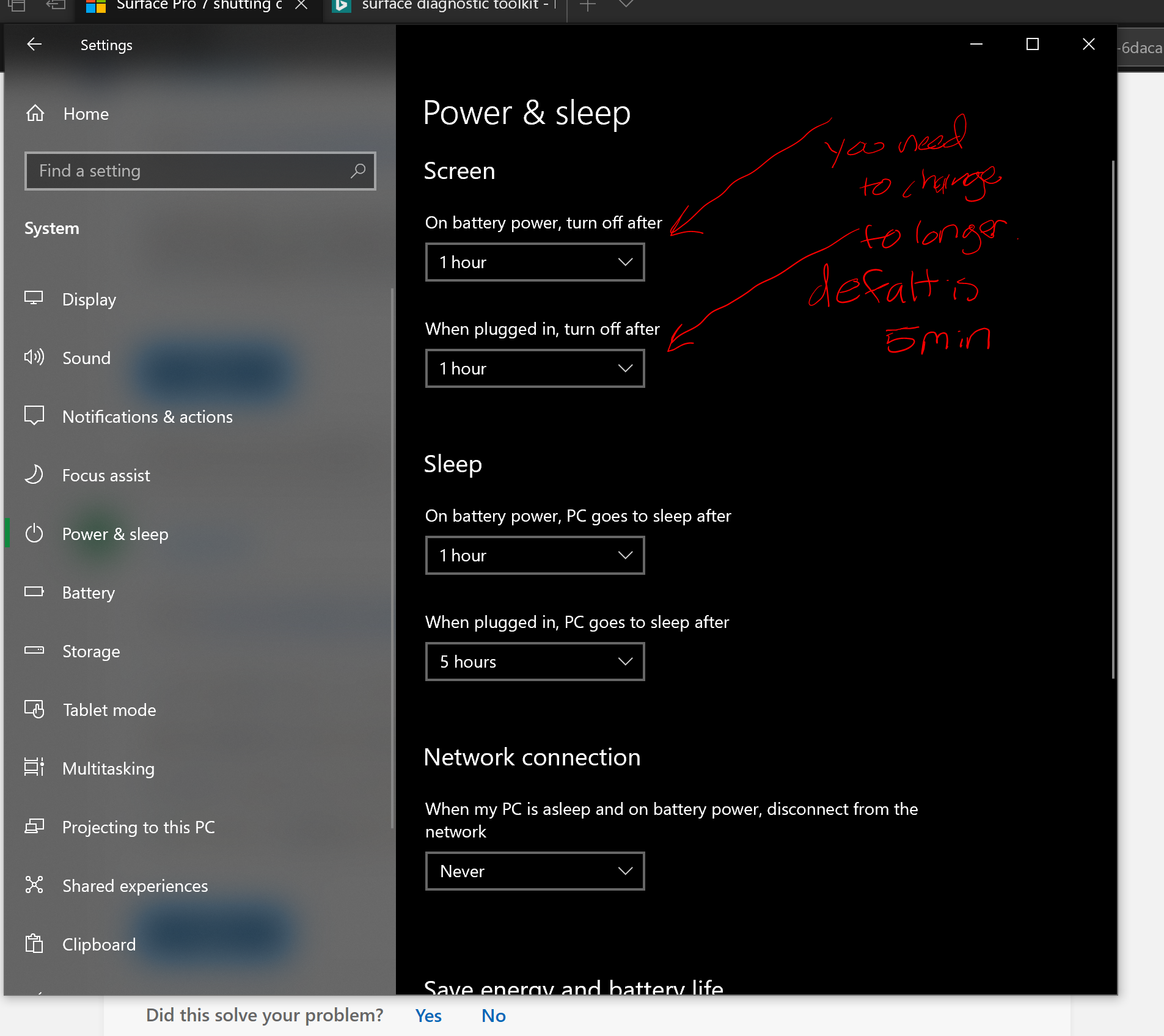 The thread on the Microsoft Answers forum already has four pages, and MVP Barb Bowman is also there as a community moderator to gather more details. There does not seem to be a solution yet. In this thread, a user complains about the same error and gets only helpless advice from the Microsoft moderators.

A German user, who also suffers from the bug, has contacted German site Golem. The shutdown is documented in the event log with an entry, there is no reason for it. MVP Barb Bowman has listed more forum posts about the problem in this MS Answers forum post. There is a vague hint that Microsoft is investigating the problem and working on a fix.

If you search the Internet for ‘Surface shutting down randomly’, you will find that this error is common to the entire Surface series and older models also had the error. Microsoft cannot get the problems under control. It’s like similar cases, like the screen problems with the Surface Pro 4 – for which I have published several blog posts. After Microsoft didn’t get this fixed, a German blog reader there came up with a working solution, which he described here. He installed Linux on the part and is happy since then – no more screen flickering at all. If I search for ‘Surface’ here in the blog, I come across a horror cabinet of cruelties.

This entry was posted in devices, issue, Windows and tagged issue, Surface, Windows 10. Bookmark the permalink.