[German]With Microsoft now putting its focus and resources to Windows 11, what's with the Windows 10 development? We will still see a feature update to Windows 10 version 21H2 in the coming weeks. But with build 19044, the last development branch for Windows 10 might have been initiated. So far, there's been no sign of a 22H1 in the Insider channels, and a tweet from Microsoft employee Brandon Le Blanc could further fuel that theory.

The development of Windows 10 in terms of spectacular new features has noticeably decreased in the last two years – at least in my opinion. Since Windows 10 version 2004 was released, there were then the variants 20H2 and 21H1 as so-called small updates, that is, changes were already delivered to the existing versions (2004 and higher) via Windows Updates, but then only released via Enablement Updates (see e.g. Windows 10 V2004: Enablement-Update KB4562830 to 20H2).

At the beginning of 2021, there was still the assumption that Microsoft was planning an extensive feature update for Windows 10 for the fall. However, that has probably come to nothing. For fall 2021, a Windows 10 version 21H2 is announced as the next feature update (Windows 10 21H2 announced and first Insider Preview released). But this will also only be released as a small feature update via Enablement Update for versions 2004, 20H1 and 21H2.

Leaning back, it appears that the air is out of Windows 10 – this Windows-as-a-service (WaaS) seems to have hit the wall. Microsoft had actually planned the innovations for its Windows 10X, which then ended in disaster and was discontinued (see Plug pulled: End for Windows 10X …). And then came in June 2021 the announcement of the new Windows 11 (siehe Yes, Microsoft introduced Windows 11), in which all the innovations expected for Windows 10 21H2 as well as the interface of the stepped down Windows 10X have been incorporated.

There is some confusion over the Windows 11 system requirements (see Windows 11: Microsoft specifies hardware requirements, no blocking on incompatible devices). But in mid-September 2021, Microsoft could declare RTM status for Windows 11 and generally release it to compatible machines in October 2021. People have been pulled from the Windows 10 team to develop Windows 11. This could trigger some thoughts.

If you think about the above considerations, you could already get the idea that Windows 10 has reached the end of its development. At least, there is no newer build than 19044 in sight – and a renunciation of further feature updates would not be the worst thing for some contemporaries. 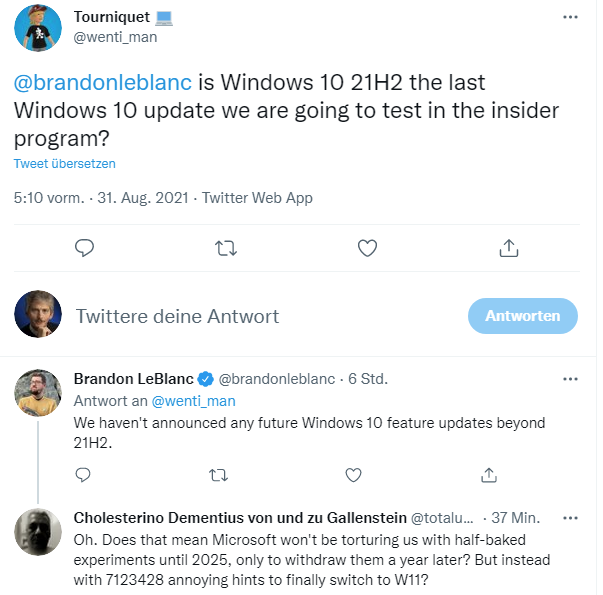 Of course, this answer gives us a deep insight. Until now, it was always the case that the next development branch was already tested with Insiders shortly before the release of a feature update. But that is not the case this time, rather Microsoft uses the Windows Insider program to test builds of Windows 11 there. So it looks like the user community is caught between two stools – some will switch to Windows 11, others will remain stuck on Windows 10, possibly not getting any more feature updates beyond 21H2 (but wouldn't be the worst thing if just bugs and vulnerabilities continue to be fixed). 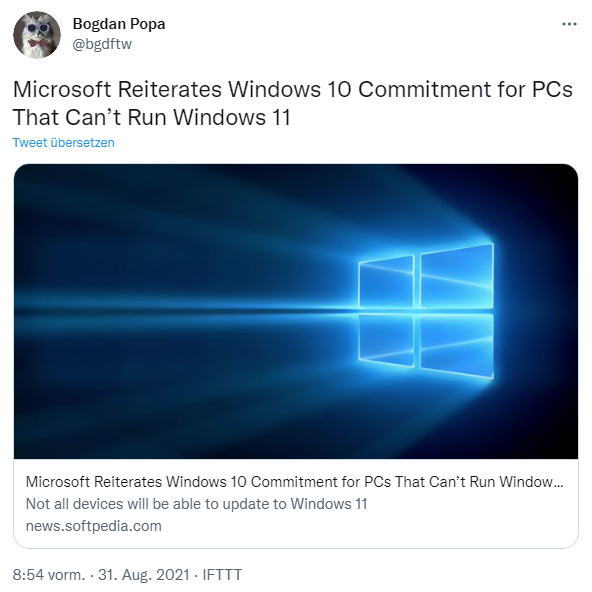 For those who are using a PC that won't upgrade, and who aren't ready to transition to a new device, Windows 10 is the right choice. We will support Windows 10 through October 14, 2025 and we recently announced that the next feature update to Windows 10 is coming later this year.

Those who cannot switch to Windows 11 will still get support for their Windows 10 boxes until October 14, 2025. And current Windows 10 systems will still get the feature upgrade to 21H2 this fall. Whether any small improvements will be included in this build via Experience Packs or regular updates remains to be seen. Maybe it's time to think about switching to another operating system?