After all, it's been the "a point of discussion" among potential users since 2021, the topic of "hardware requirements for compatible Windows 11 machines." Microsoft required TPM 2.0 and even only the newest CPU models are classified as compatible. AMD Zen+ CPUS (before Ryzen 2000 and 3000G series) and before 8th generation Intel iCore CPUs are not part of the supported hardware (there are selected iCore 7th Generation models, that are declated as compatible). I had pointed out this fact in subsequent articles.

As a consequence, many good machines are still not compatible with Windows 11. The U.S. company Lansweeper had conducted an investigation on the U.S. market in 2021 – after Microsoft announced Windows 11 – to determine how many existing systems in companies meet the compatibility requirements. This involved collecting data from an estimated 30 million Windows devices from 60,000 companies in relation to the minimum requirements.

Analysis of this data shows that, on average, only 44.4% of workstations are eligible for the automatic upgrade to Windows 11. Conversely, a good 55% of workstations are not eligible for an upgrade to Windows 11. I had some thoughts on the blog post Microsoft, sustainability and Windows 11 as an environmental disaster – because in earlier times, all of this would have passed as a "huge economic stimulus package" for hardware manufacturers.

But in the background, the threat resonated: At some point, people running Windows 11 on incompatible hardware won't get updates or upgrades – Microsoft will then cut those machines off from support. There were readers who clearly said "I don't think so, when they realize that they would be on their own, they will reconsider this step".

Microsoft locked in in the compatibility gap?

I confess, I'm also a bit naive in some places – because I thought that Microsoft itself had long since updated all the developers' machines to the required hardware properties. Because it is said that Microsoft employees also test the machines – at German site Dr. Windows I once read (Windows 11 Rollout bei Microsoft: 190.000 Upgrades in fünf Wochen) that Microsoft already has a huge number of machines running Windows 11. And the expansion of the Windows 11 rollout in January 2022 (see Windows 11 upgrade for compatible devices in final availability phase (Jan. 2022)) also looked to me like an indication that something was moving toward more compatible hardware.

This week, however, I came across the fact that Microsoft employees from Windows 11 development are still using machines that are not 100% compatible. A Twitter user noticed this. In a webcast, Claton Hendricks, program manager at Microsoft, showed various functions of the Windows Task Manager of Windows 11. It was noticed that he uses a machine with an Intel Core i7-7660U processor. However, this machine is not on the list of compatible CPUs. 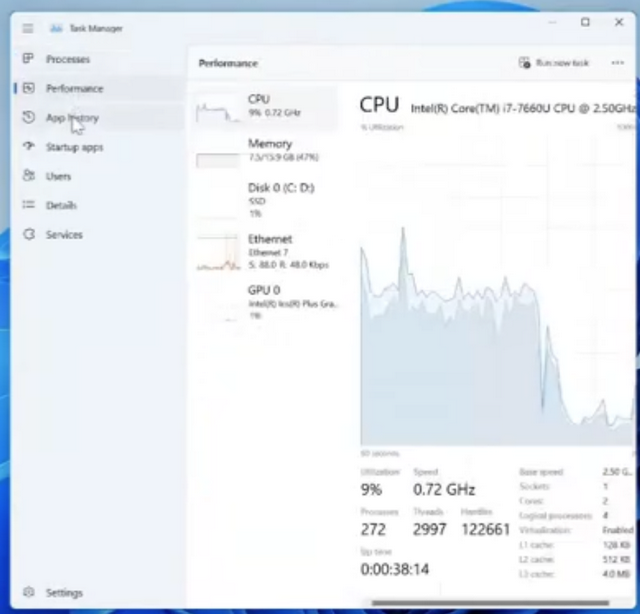 What's your take on the Windows 11 compatibility story? Will it no longer be an issue in a year and everything will jump to Windows 11? Or do you see it more as a burden that will block the success of Windows 11?

This entry was posted in Windows and tagged Hardware, Windows 11. Bookmark the permalink.